Graham Motion trains two Stakes winners, with one aimed at the Breeders Cup

FAIR HILL,Md.--Graham Motion, who is based at Fair Hill Training Track, has another star aimed for the Breeder's Cup. 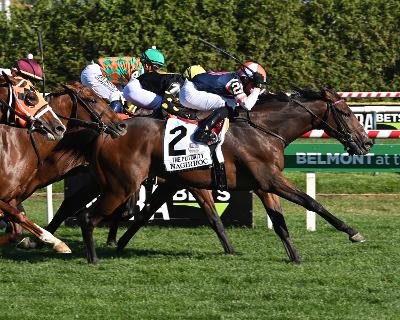 Nagirroc winning the Futurity (Photo by Adam Coglianese)Little Red Feather Racing, Madaket Stables and William Strauss’ Nagirroc won the G3, 6 furlong, $150,000 Futurity for 2-year-olds over the outer turf at the Belmont at the Big A fall meet on Oct. 9.

Nagirroc won by a neck over Gaslight Dancer in a race where the top four were separated by a neck, a head, a head and a head.

Nagirroc had previously won a maiden race for Motion on Sept. 24 after being privately bought following finishing second after breaking slowly in his first race in August at Horseshoe Indianapolis for former trainer Jim Corrigan.

Now 2-for-2 for trainer Graham Motion and his ownership group, Nagirroc earned a "Win And You're In" entry into the G1 Breeders’ Cup Juvenile Turf Sprint in capturing the 132nd running of the Futurity.

"We'll go to the Breeders Cup," said Motion, and explained that the name Nagirroc is the name of his former trainer, Corrigan, spelled backwards.

MOTION said that he wouldn't race again before the Breeders Cup Nov. 4, 5 at Keeneland.

“I think he’s a smart horse and he doesn’t have to be on the lead,” said jockey Manuel Franco, who also rode Nagirroc in his maiden win. “The pace scenario was more speed today. I don’t want my horse coming from a short time off to run today and get him in a speed duel. I just wanted to give him a chance behind the horses and it set up perfect for me.”

Motion’s assistant trainer Ian Wilson, who saddled the horse at Aqueduct, said he was impressed with the stalking effort.

“He did exactly what we wanted. Last time, he was on the lead and we didn’t feel like he needed to be on the lead],” Wilson said. “Manny got him settled behind horses and once he got some space to go, he went. Once he tipped him out and got somewhere to go, it seemed like he was moving well and moving comfortably. He got there and that’s all that matters.”

Wilson said that Nagirroc was asked to be more aggressive in his maiden win after breaking poorly on debut.

“It probably cost him,” Wilson said of the bad break in his first start. “So, last race, we wanted Manny to get him out of the gate. Today, we weren’t as worried. He showed professionalism from start to finish. He’s a classy horse.”

"Speaking Scout could end up going to the Twilight Derby at Santa Anita at the end of October,"said Motion.

Motion has had two allowance winners and two maiden winners over the past two weeks.