MIDDLEBURG, Va.--Mark Beecher had a spectacular day on Saturday, Oct. 8, winning three races, one at Geneseo Valley and two, including both featured races, at the Virginia Fall Races in Middleburg. 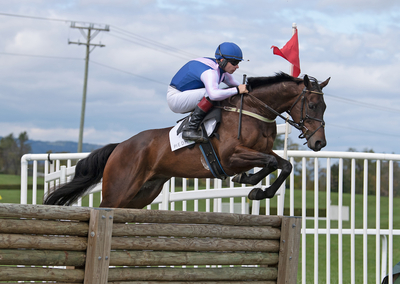 Cracker Factory, ridden by Jamie Bargary, in the Timber Stakes at Middleburg (Photo by Tod Marks)Overall, it was a day of doubles and triples, with jockey Jaimie Bargary winning three races and trainer Cyril Murphy winning two, both in Middleburg, and trainers Jack Fisher and Leslie Young each winning two races, one at Geneseo and one in Middleburg.

But it was Beecher who was the biggest winner of all, saddling the winners of two $30,000 races in Middleburg and having a third trainee win the second most lucrative race at Geneseo.

"We're not a big barn, but we're growing," said Beecher. "There's a lot of competition now, so  it's important to have days like that."

Beecher hunted and rode show jumpers in his native Ireland before arriving in the U.S. in 2010 and riding in steeplechase races.

He was a top jockey, with 485 starts in just eight seasons, during which he won 106 times, finished second 106 times and third 54 times for just over a 50 percent record of hitting the board, according to Central Entry Office reports, and he was the Leading Timber Rider in 2015.

Two of those wins were in the Maryland Hunt Cup in 2013 and 2015, one, on Professor Maxwell when he jumped a few fences, including the daunting 5'9" third fence, without stirrups.

BEECHER officially retired as a jockey in 2019 and turned to training full time. 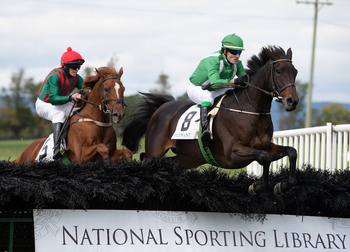 "He won a point-to-point in Ireland in his only start over there," said Beecher. "I sourced him out for Alex, who wanted a nice horse that could win, and I've had him since June. This was his first race in this country. The horse seems fine after the race. He might head towards the allowance at the Gold Cup."

Storm Team, trained by Fisher, led over Boutonniere for most of the race while Cracker Factory ran in the back of the field until he began to close after the last fence and split the leaders to go on for the win.

"Jamie gave him a great ride,"said Beecher. "He delivered him at the right time. He broke his maiden over timber two weeks ago, so going in this stakes was a big step up for him. He's a nice horse for the future."

"He's probably nominated for the International Gold Cup," said Beecher, who added that he might not run him. "He's done a lot for us. He's achieved enough for us this fall."

Cracker Factory, now a 7-year-old, ran very successfully over hurdles from 2017 to 2019 in England before being imported to this country.

He was trained by Fisher before Beecher claimed him at Foxfield on Oct. 4, 2020, who also ran him over hurdles before switching him to timber.

Cracker Factory was third in a timber allowance at Middleburg last year, then fourth in a steeplethon.

This year, he was fifth in a Maiden race then won a Maiden Special Weight at Shawan Downs on Sept.24.

Master Seville, trained by Beecher, won at Geneseo, and the Geneseo meet will be covered tomorrow.

Welshman, owned by Harold A. Vie, trained by Fisher and ridden by Graham Watters, won the $25,000, 2 1/8 mile Ratings handicap by 8 lengths over Mr. Bridger, trained by Laird George.

Top Brass (GB), owned b Ashwell Stable and trained by Young, won the first division of the $15,000 Maiden Starter Hurdle by 1/2 length over Lowcoutry, trained by Lillith Boucher, and Sean McDermott trained and rode South Branch Equine's Robert's Luxury to win the second division by 2 1/4 lengths over Left Blank, trained by Wyatt.

"Top Brass is just a fun maiden hurdle horse," said Young. "He was a bleeder in England, so lasix has helped him over here."