BENSALEM, Pa.--Bernie Houghton saddled a pair of horses bred by his mother Betsy to win one stakes and place second in another on Pa. Day at the Races at Parx on Sept. 24. 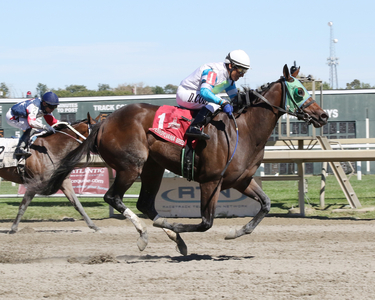 "Midnight Parade is a filly we bred and sol to Joe Hillman as a baby,"said Houghton, "I thought she was good before she ran in her first race. She can run. She won her first race by 9 lengths, and from then on I planned on this race. She's one of those 2 year olds that is very professional and mature."

"Joe Hillman has been in this sport through good times and bad," said Houghton. "His wife June works for Peter Gianguilio at Castle Rock Farm. He was very excited for the win."

Midnight Hauler, owned by Betsy Houghton's Sylmar Farm and bred by her, placed second by 3 1/4 lengths to Buy Land and See, trained by Guadalupe Preciado, in the $200,000, 1 1/16 mile Alphabet Soup Turf Stakes.

"MIDNIGHT HAULER won a stakes at Penn National before this," said Houghton."He ran good here but he was second best."

"It's been hard to find races for him because he's a turf horse," said Houghton.

Kitten's Collusion, bred and owned by Isabell deTomaso, who is the aunt  of Bambi Glaccum, Plantation Field's secretary/treasurer, won a $56,250, 1 1/16 mile Allowance Optional Claiming race on the turf at Meadowlands on Sept.23.

Nagirroc, owned by Madaket Stables, Little Red Feather Racing and William Strauss and trained by Motion, won a $95,000, 6 furlong Maiden Special Weight on the turf at Aqueduct of Sept. 24 by 3 1/2 lengths.

KERI BRION, who is expanding into flat racing after being steeplechasing's leading trainer in 2021, her first year of training after being Jonathan Sheppard's assistant trainer for almost a decade, won another flat race on Sept. 25.