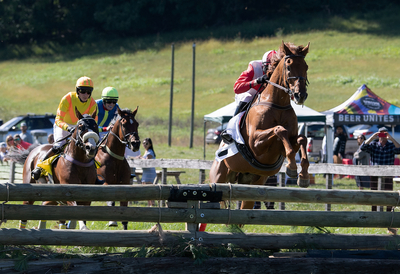 Storm Team leads over last fence in the Timber Stakes (Photo by Tod Marks)Owned by Sheila Williams and Northwoods Stable, trained by Jack Fisher and ridden by Graham Watters, Storm Team inherited the lead after Junior Senator, who had charged out to a 30 lengths lead, fell heavily at the second fence but got up to gallop off.

Storm Team was tracked throughout by race favorite Andi'amu, trained by Leslie Young, who was never able to get to Storm Team.

This was the second time Storm Team has beaten Andi'amu.

"Andi'amu likes soft going, and Storm Team likes hard going," said Fisher, who said the plan had not been to go to the lead.

"We knew the other horse (Junior Senator) would go to the lead, although I thought he'd stay there longer," said Fisher. "Storm Team doesn't need the lead any more. He's matured, and as horses mature they can be rated more easily."

Fisher said Storm Team would go next to Middleburg and then to the Gold Cup.

STORM TEAM raced on the flat for his breeder, Colts Neck Stable, as a 3-year-old.

He began his jumping career for his present owners over hurdles at Radnor as a 4-year-old, winning three times over hurdles, including the AFLAC Supreme Hurdle Stakes at Pine Mountain in 2019 as a 5-year-old, before being switched to timber in 2020.

This was his third stakes win over timber.

Fisher also saddled Riverdee Stables and Ten Strike Racing's Awakened, ridden by Jamie Bargary, to win the $30,000, 2 mile Maiden Hurdle by 7 1/2 lengths over Uco Valley, trained by Young, in the fastest time of the four hurdle races of 3:30.

"Sean Clancy found him," said Fisher."He had some bone bruising, so we gave him time off."

Awakened, by Curlin out of an A.P. Indy mare, was bred by Phipps Stable and was raced by Phipps as a 3- and 4-year-old in 2020 and 2021, winning a maiden special weight race before being bought by Clancy for his Riverdee syndicate.

Awakened finished twice second and once fourth over fences earlier this year before winning a flat race for horses that had started over fences at Colonial Downs.

"He won that race very professionally,"said Clancy of his win at Shawan Downs. "He'd been close all year. He's been honest and solid all year."

"He's got a great pedigree," said Clancy. "I've found over the years that pedigree is important when you're looking for jump prospects. The Phipps have a great breeding program, and they take good care of their horses and have a great trainer in Shug McGaughey."

Step to the Bar, owned by Del Rio Racing, trained by Kate Dalton and ridden by Bernie Dalton, won the $35,000 Allowance Hurdle by 1 1/4 lengths over Bright Eyed Eagle, trained by Kathy Neilson.

Mark Beecher saddled The Hundred Acre Field's Cracker Factory, ridden by Bargary, to win the $15,000 Maiden Timber by 8 lengths over Cause for Pardon, trained by Young.