Both overwhelming favorites beaten in steeplechase races at Aqueduct

OZONE PARK, N.Y.--Two steeplechase races were held at Aqueduct Racetrack on Sept. 15, and in both races the overwhelming favorites were beaten and in one the favorite was impeded at the start by an outrider. 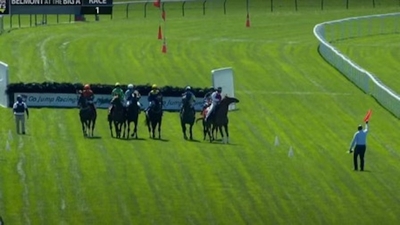 The start of the Entenmann Novice Stakes, with the outrider in front of The Mean QueenWhile steeplechasing in the 50s and 60s was a big part of racing at New York tracks and a daily occurrence, as betting on those races declined steeplechase racing was relegated to once a week at Saratoga and one day with two stakes races at Belmont, which was switched to Aqueduct this year while Belmont is renovated.

So the question is, did two overwhelming favorites being defeated do more harm than good to racing at major tracks as the betters lost on the two favorites, particularly with one of the favorites, The Mean Queen, being impeded at the start.

If a gateman holds a horse's head in the gate in a flat race, causing that horse to break some  lengths behind the rest of the field, in most cases, if the horse finished in the top three, the horse keeps the purse but the horse is declared a on-starter to protect the betters.

Should The Mean Queen, an overwhelming favorite who was beaten a head for the win, have been declared a non-starter to protect the betters?

There was no Steward Inquiry into the race.

"The starter was Hector Soler, who starts all the races at Saratoga, including the jump races, at Belmont and at Aqueduct," said National Steeplechase Director of Racing Bill Gallo. "He's a very good starter."

"The Stewards reviewed the start and determined that that did not impact the start," said Gallo. "The Starters reviewed the start thoroughly. The outrider shouldn't have been there, but this was a 2 3/8 mile race and this was only a few seconds at the start. The mare had a good position throughout the race. She put in a very good performance coming off a long layoff."

"If the favorites were going to win every race we wouldn't have racing," said Gallo. "There hadn't been jump racing at Aqueduct since 1974. These were two really important races and we had he two best horses in steeplechasing running. That was a wonderful day for the National Steeplechase Association in front of New York fans."

"We had the two best horses in steeplechasing racing at Aqueduct," said Gallo. "I can't think of a single negative thing."