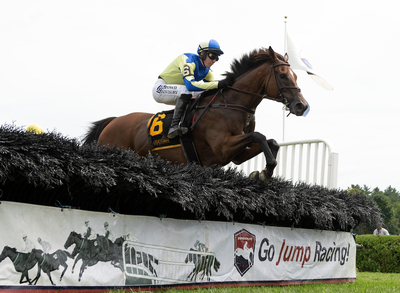 Snap Decision leads early in the Jonathan Sheppard (Photo by Tod Marks)An 8-year-old gelded son of Hard Spun, Snap Decision finished second in this race last year to The Mean Queen, who is entered in the $75,000 William Entenmann Novice in Race 1.

Snap Decision most recently dominated the G1 Jonathan Sheppard Handicap on Aug. 17 at Saratoga Race Course where, despite carrying 164 pounds, he won by an impressive 13 1/4 lengths over Going Country in the 2 3/8-mile race.

“I was very proud,” Fisher said. “He’s doing better than ever and I think he’s a much better horse than he was last year.”

Snap Decision will be making his fifth start of a season that began by finishing second to Iranistan in the G2 Temple Gwathmey Hurdle in April at Middleburg in his first race off a six-month respite.

He followed that with a repeat victory in the G1 Iroquois in May at Percy Warner, defeating Pistol Whipped by 7 1/4 lengths.

IN JULY, he raced on the flat for the first time since he joined Fisher’s barn in April 2019, finishing third in the Colonial Cup at Colonial Downs before the Jonathan Sheppard.

Fisher said jumping has allowed Snap Decision to reach his full potential as a racehorse.

A model of consistency, Snap Decision has never finished off-the-board in 16 starts over the jumps.

Keri Brion has entered two horses, Iranistan and Ask Paddington, who isracing for the first timein this country after winning nine times in England over fences..

Hudson River Farms' Iranistan finished a distant sixth as the favorite in the G1 A.P. Smithwick behind Down Royal on July 20, running second for the first mile before fading to the back of the field.

“He bled in the Smithwick, but he’s never bled before, so we believe it was a one-off thing,” Brion said. “He’s gone to the hyperbaric chamber and we’ve done some things, so he’s back and it will be good to see him back over two and a half miles.”

Iranistan defeated Snap Decision by 2 1/4 lengths this spring in the Temple Gwathmey, and Brion said she is hopeful the son of Einstein can do it again as he carries 20 pounds less [148] than his Snap Decison.

“Getting all the weight off Snap Decision helps. He beat him when he had 14 pounds off of him,” said Brion. “Having 20 pounds off this time is good to see. If he shows up back to the Iranistan we know, it will take a lot to beat him. He’s showing all the signs he’s still the horse that beat Snap Decision this spring.”

Iranistan was G1 placed for Jonathan Sheppard when second in the Smithwick and third in the New York Turf Writers Cup at Saratoga in 2018.

In addition to the Temple Gwathmey, Iranistan’s other win in four starts for Brion was a 1 1/2 length score in the Noel Laing in November at Montpelier.

Metahorse Racing's Ask Paddington enters the Lonesome Glory after four victories in England from May to July, with a strong nine-length win going 2 9/16 miles at Market Rasen.

Most recently, he was a determined three-quarter-length winner at the same course going 2 7/8 miles over good going.

Brion said that while some European horses struggle with the speed of American steeplechasers, Ask Paddington is plenty fast and has served as the workmate for Brion’s Eclipse winnr The Mean Queen.

“He has a lot of speed at home and he could really be anything,” said Brion. “Any horse that can work with The Mean Queen you have to respect. He can stay right alongside her.”

An 8-year-old son of Ask, Ask Paddington will make his 33rd start at his 15th racetrack, something Brion said the chestnut gelding has taken all in stride.

“He’s a very classy animal and they’ve done a great job with him in England,” said Brion. “He came here in really good order. You can tell he’s a good horse, so we’ll see. I’m excited about him.”

Parker Hendriks will ride Iranistan from post 2, while Danny Mullins is on Ask Paddington, who will carry 146 pounds from post 5.

Four-time stakes-winner Song for Someone, in at 150 pounds, will be ridden by Thomas Garner and is one of two entries for Leslie Young, who also sends out G2 winner Redicean, who will carry 140 pounds and be ridden by Sam Twiston-Davies.

Mrs. S. K. Johnston, Jr.’s Song for Someone will make his second start in this country after finishing a distant fifth in the Jonathan Sheppard.

The 7-year-old Medicean gelding won three stakes in a row in 2020 in his native England, taking the Kingwell Hurdle in February at Kempton, the Ascot Coral Hurdle in November at Ascot and the International Hurdle in December at Cheltenham.

He is looking for his first win in seven starts since then.

Sharon Sheppard’s Redicean makes his 10th appearance in G1 company after finishing third to Snap Decision in the Jonathan Sheppard.

The 8-year-old son of Medicean had his only graded win when he was a runaway, 54 length winner of the G2 David Semmes Memorial in May at Great Meadow.

Redicean has hit the board in five other graded events, including a third in this race last year.

The Lonesome Glory is race 2 on Thursday’s 10-race Opening Day Card, which begins with the William Entenmann Novice Stakes at1 p.m.

The William Entenmann, a 2 3/8-mile novice hurdle stake open to older horses who have not won over hurdles prior to March 1, 2021 or which have never won three races other than 3-year-olds, is highlighted by the return of The Mean Queen for Brion.

Buttonwood Farm's The Mean Queen has been away from the races since finishing her Championship season with a win in the G1 Grand National in October at Far Hills.

The 6-year-old Doyen mare won the Lonesome Glory last year and was nominated to attempt a title defense, but entered the William Entenmann to ease back into the races after her lengthy layoff.

Brion said she is excited to see her three-time G1 winner back at the races.

“She hasn’t run in 10 months and it seems like the most logical decision,” said Brion. “She gets a good weight in this so it’s her run to get her going again. She’s ready to go. This is the type of horse you dream that you get to train at some point of your career. She’s incredible and we’re really thrilled to have her back out. It’s great the following she’s brought to the sport.”