GRANTVILLE, Pa.--Bernie Houghton had two allowance winners in one night, including one bred and owned by his mother Betsy, while Ricky Hendriks had a very appropriate winner the next day, a horse bred by Queen Elizabeth, validating even a day after her death once again her love of horses and racing. 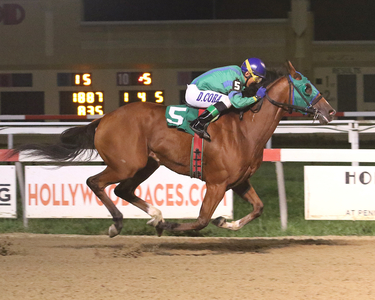 Bourbon Music winning an Allowance race at Penn National (Photo by EquiPhoto)"It was about time, ti's been a little slow lately," said Houghton, who started the year with multiple wins over many weeks but had slowed down over the past couple of months.

Bourbon Music, bred by Betsy Houghton and owned by her Sylmar Farm, won a $31,600, 6 furlong Allowance race at Penn National on Sept. 9.

Bourbon Music stalked the early pace, swung three wide into the stretch and went on to win by 3 1/2 lengths.

"Mom bred him,and we broke him," said Houghton, who raced the gelding by Weigelia as a 2-year-old and then turned him out at the farm over the winter.

"He came back off the farm after the winter bigger and stronger," said Houghton. "I'm very happy with the way he's coming along. He's still young, he's only 3,and he's won a lot this summer. Maybe we'll give him one more race and then put him away for the winter."

Bourbon Music raced three times as a 2-year-old, winning a maiden claiming race in September of 2021.

This year, he's run eight times, winning three allowance races and a starter race as well as finishing third in an allowance race and twice finishing fourth in stakes races.

JAMES ESHELMAN'S Swan Point won a $28,000, 1 1/16 mile Allowance race for fillies and mares 3 and up on the same evening at Penn National.

"Swan Point is owned by Kim Eshelman, who works for us," said Houghton of the horse that races in her husband's name. "She bought that horse. Her mare, that she breeds, missed a year and she had nothing to race, so she went to the sale at Timonium."

Eshelman bought the yearling by Oxbow, bred by Blackstone Farm, for $15,000 at the Timonium Yearling Sale in 2019.

Swan Point ran mid-field early in the race at Penn National, swung five wide on the turn and went on to win by 1 3/4 lengths.

Swan Point didn't run as a 2-year-old and won a maiden special race as a 3-year-old.

Throughout the rest of  2021 and this year, Swan Point consistently ran second or third in allowance races, never finishing worse than fourth, and this was her first allowance win.

"I keep trying to get her on the grass," said Houghton. "I think she'd be even better on the grass. We'll probably give her one more race this fall and then, like Bourbon Music, put her away for the winter." 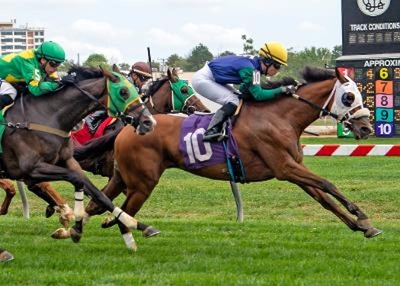 West Newton winning at Pimlico (Photo by Jerry Dzierwinski)Hendriks said he thought it an interesting coincidence that a horse bred and raced by the Queen won just after her death.

"The Queen raced him on the flat," said Hendriks.

West Newton raced for Queen Elizabeth as a 2- and 3-year-old, winning a handicap at Doncaster.

"I believe Sean Clancy bought him at a sale in England for Irv Naylor," said Hendriks. "He didn't run very well for Cyril Murphy."

Murphy, as trainer for Naylor, ran him three times, with a sixth, a seventh and then a second at Willowdale.

"I had an owner, Patrick Lewis, who races as Upland Flats Racing,  who loved his breeding, so we claimed him at Radnor last year," said Hendriks.

"He was supposed to run at Aiken,but he hurt himself schooling," said Hendriks. "He hyper-extended a knee and had to have time off, so he wasn't ready to run at Saratoga.

Hendriks said he and Lewis were casting about, wondering where to race him next, when Lewis' father suggested running him on the flat.

So West Newton ran at Pimlico and won.