Keri Brion has a first-time 2-year-old winner and Motion, Houghton, Matz and Kingsley have winners

NEW KENT, Va.--Keri Brion saddled a 2-year-old to win in his very first race at Colonial Downs, while Graham Motion had an allowance winner at Saratoga and a stakes winner at  Kentucky Downs. 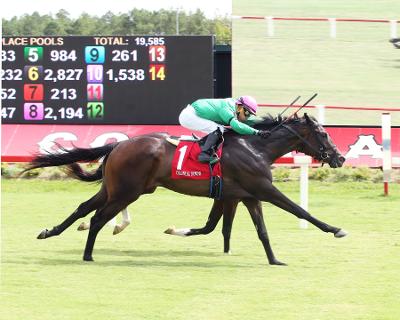 "He's a nice little horse,"said Brion. "I've had him since January, and this was his first race.He does everything right in the morning. He should improve off this race. We'll probably take him to Keeneland next."

This was Brion's second flat winner this year, and she's also has a couple of very close seconds at Saratoga.

Brion was leading steeplechase trainer last year in her first year of training after serving as Jonathan Sheppard's assistant trainer, and this year she is currently leading in Trainer Money Won and stands second in  Races Won, but she is working to expand her stable to include winning flat horses, following in the footsteps of Sheppard who had Eclipse winners both on the flat and over fences.

"This is what I've always wanted to do, to have flat horses as well as jumpers,"said Brion. "I'm hoping winning races like this will show owners that I'm successful training flat horses, too."

"Karen Woods, who races as Maram, actually had jumpers with Jonathan," said Brion."I've kept in touch with her, and she sent me three 2 year olds in January. I probably have six or seven nice two year olds now." 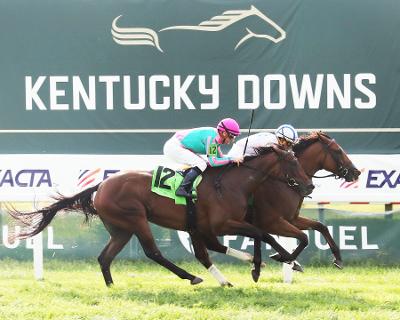 Vergara, inside, wins at Kentucky Downs (Photo by Coady Photography)"He's a free runner, like his sister Mean Mary," said Motion,

"We gelded him, and that really helped him,"said Motion. "He's a big horse, and he's tough in the morning."

Vergara raced first or second through the race, was challenged by Skims, trained by Shug McGaughey, in the stretch but dug in to win by a head.

Motion also had two Maiden Special Weight winners, with Isabelle de Tomaso's Indiantown winning a $68,750, 1 1/16 mile turf race for 3 year olds and up at Monmouth by a neck on Aug. 28.

Huntingcoco was bred by HnR Nothhaft Horse Racing, is now owned by Villa Rosa Farm and Harlo Racing and is trained by Bob Baffert.

This was Huntingcoco's first race, and by winning at Del Mar so impressively, she looks like she might have a very bright future.

BERNIE HOUGHTON had two winners, the first in a 21,500, 6 furlong Maiden Claiming race for 3 year olds and up at Penn National on Aug. 24.

Richard Bosshard Jr.'s homebred Heavenly Heart won by 9 lengths after stalking the early pace and drawing off to win as much the best.

Tolaga Bay rated inside, swung three wide into the stretch and got up to win by 3/4 length,