NEW KENT, Va.--Jack Fisher has gone in for breathtaking finishes of late, first with Proven Innocent at Saratoga last week and now with Awakened at Colonial Downs on Sept.5. 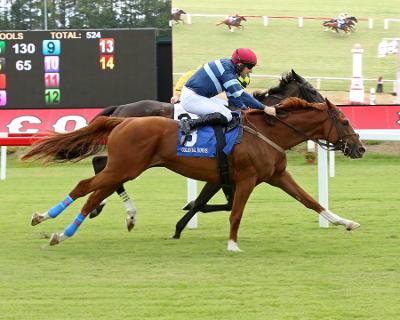 Awakened just nipped Robert's Luxury at the wire (Photo by Coady Photography)Riverdee Stable and Ten Strike Racing's Awakened, ridden by Jamie Bargary and trained by Fisher,  got up in the last stride to win the $50,000, 2 mile Starter Allowance flat race for horses that had started over fences at the meet but had not won.

"When he crossed the wire, I threw my hat across the room and uttered a four-letter word,"said Sean Clancy, owner of Rverdee Stable, who was watching on the live stream with his wife at home. "I thought he'd lost. When we watched the finish again, I thought maybe he had won. It was a pleasant surprise when they announced the results."

Real Factor, trained by Arch Kingsley, went out to a huge lead, in front by 1/16 of a mile at one point, but the field of 12 began to reel him in on the final turn, and Awakened slipped through on the inside turning into the stretch and then swung wide to just nip Robert's Luxury, trained and ridden by Sean McDermott, at the very last stride to win by a nose.

"I THOUGHT Jamie gave him a good ride," said Clancy. "It was such a bizarre race. They were just crazy fractions, so I was pretty sure Real Factor would come back to them. Jamie had him fourth, just loping along by himself. Awakened has innate stamina, so I thought he'd come at the end. Then he got stopped on the turn, and Sean got to the lead first, so I thought we were finished, but then he came on again."

Clancy, as Clancy Bloodstock, bought Awakened from the Phipps Stable, which had bred and raced him with trainer Shug McGaughey.

Awakened is by Curlin out of an A.P. Indy mare.

"Awakened ran some good races over hurdles before," said Clancy. "He was second at Middleburg and then second at Colonial in July. But then this flat race with good money came up. He'll go back to hurdles, probably at Middleburg or the Gold Cup."