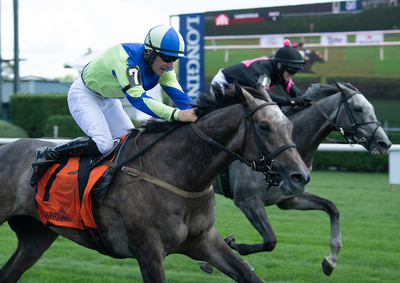 Bandua, ridden by Gerard Galligan, made a huge move on the final turn to open a big lead in the stretch, with Proven Innocent chasing, but even three-quarters of the way down the stretch it didn't look possible for Proven Innocent to catch the leader.

Proven Innocent, by Blame out of an A.P. Indy mare, was bred by Stuart Janney and raced by for him by Shug McGaughey, winning a $90,000 Maiden Special Weight at Belmont in September, 2021.

"WE BOUGHT Proven Innocent and Romp together," said Fisher. 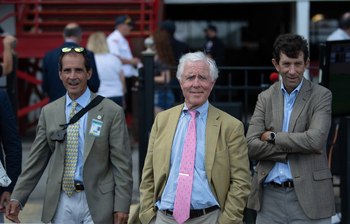 Mike Hankin, Charlie Fenwick and Jack Fisher (Photo by Tod Marks)This was the 4-year-old's fourth start over fences after winning a maiden special weight at Iroquois in his second start and then finishing second to Freddy Flintshire in an allowance at Saratoga a month ago.

"He'll probably run next at Aqueduct in the novice race," said Fisher.

"It was a terrific race," said Charlie Fenwick, a co-owner with Mike Hankin and Charlie Noelle in Bruton Street. "He ran well and jumped well. It was a gutsy performance.We were screaming at the end."

"He got a terrific ride from Jamie," said Fenwick. "He saved ground on the inside and then swung out in the stretch to get a free run."

"I won on Bandua last time out," said Bargary, who won his fifth race in a row in the Saratoga race after winning both races at Colonial Downs two weeks in a row. "I knew he'd look at the crowd when he got in the stretch, so I had something to aim at."

"I ride this horse in the morning,"said Bargary, who rides out for Fisher daily. "He has as big a heart as I do. I knew he'd give me everything."

"This was my first win at Saratoga," said Bargary."I've been second a couple of times, but this was a sweet win."