The get of Union rags had been pretty quiet for a while, but that silence was broken with a vengeance on Aug. 22, when, in just six days seven of his get, three colts, three fillies and a gelding, scored in races that included two stakes wins, two  graded stakes placIngs and three maiden wins, including one that earned the Thoroughbred Daily News' TDN Rising Star distinction. 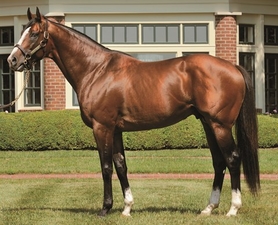 Union Rags Appropriately enough, these top finishes were book-ended by wins from horses trained by Michael Matz, who had trained Union Rags.

On Aug, 22, Matz started the skein of victories when he saddled the 4-year-old filly Consider This, owned by George Strawbridge's Augustin Stable, to win a 11/16 Maiden Special Weight at Delaware Park.

That was the third lifetime start for Consider This, by Union Rags out of an A.P. Indy mare, who had finished second in Maiden Special Weight races at Gulfstream Park and Pimlico earlier this year.

Then on Aug, 25, Catalina Cruiser, out of a Mineshaft mare, trained by John Sadler, won the G2, $200,000 Pat O'Brien Stakes at 7 fulongs at Del Mary by 7 1/4 lengths, giving this 4-year-old colt four wins from four starts and his second G2 Stakes win.

Also at Del Mar on Aug. 25,  the 3-year-old colt Tatters to Riches, another out of an A.P. Indy mare, trained by Jeff Mullins, won the $100,000, 1 mile Shared Belief Stakes by 3 3/4 lengths, running his lifetime record  to three wins from four starts.

AT SARATOGA on Aug. 25, the 4-year-old filly Still There, out of a Smart Strike mare, trained by Dane Kobiskie, placed second to Marley's Freedom by 3 1/4 lengths in the G1, $500,000 Ballerina. giving her three wins, including a Stakes win at Laurel, and a second from five starts.

Of the eight entries in in the Ballerina, three were by Union Rags, with Union Strike placing fourth and Tequilita placing sixth.

The following day, Spring Lily, out of a Bertrando mare, trained by John Shirreffs, placed third in the G3, $100,000 Torrey Pines Stakes at Del Mar, giving her two wins and two thirds from five starts.

Russell JonesOn the same card, in his first start, Tale of the Union, a 2-year-old colt out of a Tale of the Cate mare, trained by Bob Baffert, won a $79,035, 5 1/2 furlong Maiden Special Weight by eight full lengths despite being bumped at the start, and earned the TDN Rising Star distinction.

Then on Aug. 27, Matz completed the skein of top finishes when he saddled Augustin Stable's 4-year-old gelding Winter Union, outog a thunder Gulch mare, to win the 1 1/2 mile, $85,000 Maiden Special Weight race, giving him one win and three seconds from six starts.

"Everywhere you turn, they're doing it," said Russell Jones, a top bloodstock agent who sold his Walnut Green a few years ago and now buys and races for himself.

Jones is a friend of Union Rags' owner Phyllis Wyeth, who is his wife Donnan's cousin, and he advises her on her Chadds Ford Stable.

"This run was very gratifying," said Jones. "We'd had a bit of a slow spell, but now a big revival has come his way."