Leslie Young wins two at Colonial, including the Stakes with Our Bab

NEW KENT, Va.--Leslie Young saddled the winners of both the Ratings Handicap and the Filly and Mare Stakes at Colonial Downs on Monday, Aug.22, increasing her lead in Trainers, Races Won. 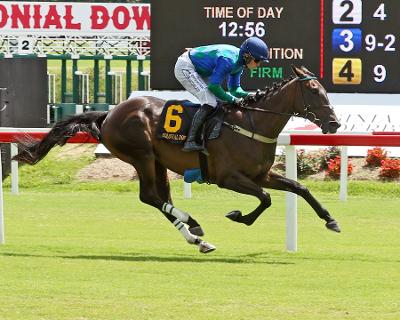 Our Bab (Photo by Coady Photography)Young now has 24 wins to Keri Bron's 20, while Brion still leads in Money Won.

"I was in England for Cheltenham," said Young. "Matty Flynn O'Connor makes and trains point-to-point horses, and Hamish McCauley,an agent I work with, had been after me for months to buy this horse O'Connor had."

"She ran sixth at Colonial  in her first race over here," said Young. "She was a bit green. Today was perfect.There was plenty of pace."

OUR BAB ran fifth early, moving up gradually to go to the lead in the final turn. 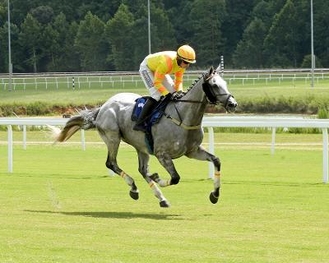 Cause for Pardon (Photo by Coady Photography)"She's a big, strapping filly," said Young."I think she'll get better with age. She's by Walk In The Park (Ire),who is also the sire of Andi'amu. "

"There's no filly stakes at Far Hills this year, so we'll see what they put her Ratings up to," said Young. "The owners were delighted today. She ran a good race and jumped well."

Young also saddled Ballybristol Farm's Cause for Pardon, ridden by Garner, to win the $35,000 Ratings Handicap by 14 lengths over Welshman,, trained by Jack Fisher, and Mr. Bridger, trained by George Laird.

"We claimed Cause for Pardon out of Arlington for $10,000 two summers ago," said Young.

Cause for Pardon ran over fences 12 times  in maiden special weights, with a number of seconds and thirds before breaking his maiden at Radnor last May.

"They had a nice race with new conditions for horses that had started for a claiming price at Radnor, and he won" said Young.

This was his first race since Radnor.

Cause for Pardon ran third for most of the race, moved up on the turn and drew off for the win,