NEW KENT, Va.--Graham Motion capped off a seven race winning streak with a victory in a MATCH race at Colonial Downs on Aug.16. 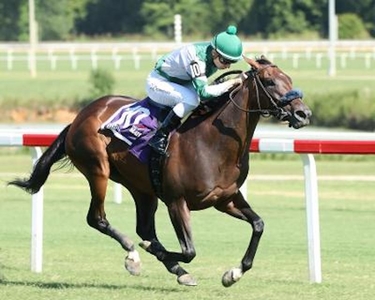 This was one of four MATCH races at Colonial.

The Buckland had an international flavor as King Vega was making his fifth U.S. start after beginning his career in Great Britain.

Trained by Motion and ridden by Angel Suarez, King Vega, who normally comes from off the pace, found himself on the lead soon after the start and coasted home by 1 1/2 lengths over Militarist, with English Tavern another 1 1/2 lengths back in third.

“It was not the plan at all to be on the lead at all,” said Suarez, who is based at Delaware Park but often rides at other Mid-Atlantic racetracks. “I’d like to thank the owners and Graham Motion for letting me ride. The idea was to be fairly close and then catch up, but Plan B worked out pretty good.” 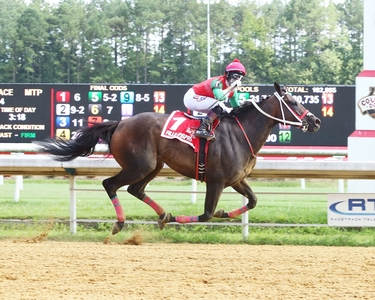 Motion has Spendarella, who was second in a Stakes at Ascot, entered in the G1 Del Mar Oaks on Saturday, Aug. 20.

King Vega isn't qualified for a win in the series, as this was his first start in the division, as this was the fourth leg of the 2022 Mid-Atlantic Thoroughbred Championships Series (MATCH), with one leg left, at Parx in October.

Mark Grier’s Eons, who won both of his MATCH Series starts, was fourth in the 1 1/8-mile $150,000 Buckland and now leads the division with 23 points after three starts.

Should he compete at Parx in October, he would earn 5 bonus points on top of points for finish position and could be in contention for the overall title.

CJI Phoenix Group and No Guts No Glory Farm's Fille d'Esprit won the Pearl Stakes and is now tied with Kaylasaurus for the lead in the Filly and Mare Sprint—Dirt division.

It was a specially meaningful win for one of her owners, Carl Ianott, who traveled from Las Vegas for the race,

Ianotti turned 65 the day before the Seeking the Pearl and also recently had his last radiation treatment.

“I’m a cancer survivor,” Ianotti said. “My wife has been very supportive as have John and Gina Robb (of No Guts No Glory Farm), and the horses have been the best therapy for me. As for this horse, what can I say? She’s a blessing from God."

Didia won the Old Nelson but isn't eleigible for points with only one start so the 5-year-old Mr. Speaker continues to hold the lead in the Filly and Mare Long—Turf division with 26 points and is now the overall MATCH Series leader heading into the fifth and final leg.

Beren leads the 3-Year-Olds and Up Sprint—Dirt division despite not running in the $150,000 Chesapeake at Colonial, which was won by Buiilt Wright Racing's Jalen Journey after Necker Island was disqualified.