Cynthia and Charles McGinnes as breeders and Dale Capuano as trainer each had three wins on Maryland Pride Day, Md.-bred Monte Crista wins Stakes at Saratoga

LAUREL, Md.--Maryland Pride Day on Aug. 18 celebrated Md-breds, and Mr. and Mrs. Charles McGinnes bred three of the 12 winners while Dale Capuano trained three winners, including one bred by the McGinneses. 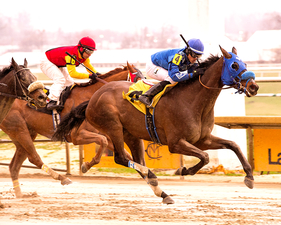 Sonny Inspired (Photo by Laurel track photographer James McCue)Cynthia and Charles McGinnes have had great success over the years at their Thornmar Farm in Chestertown, Md., by breeding back to the same to female families.

The McGinnes' Thornmar Farm sold Come Sundown for $30,000 as a yearling, and he was bought by Capuano.

"Dale has been buying horses from up  probably every year for 20 years," said Mrs. McGinnes. "Come Sundown is out of Desiderata, a mare we bred, who is out of Almost Paradise, who is out of the first mare we bought, Muffie's Muffin."

Distant Shore, the subject of a recent story in The Horse, who thrilled over 75 of his owners who were at Indiana Race track to see him win his first start, is out of Glimpse, who is out of Almost Paradise, making him a cousin of Come Sundown.

PETE'S PLAY CALL, owned by M and M Racing and trained by Robertino Diodoro, who was also bred by Mr. and Mrs. McGinnes, won the second race, an Allowance race.

"Pete's Play Call is the last foal we sold out of Taft Lil Queen," said McGinnes. "She is the dam of four stakes winners. She's a great broodmare. We sold that colt for $90,000 in Kentucky. He's won over $260,000. He was racing in California, and someone realized that, with the Maryland bonuses of 30 percent for owners, it was the place to run Md-breds, and they went out west and bought him."

The third winner bred by Mr. and Mrs. McGinnes was Sonny Inspired, owned by D. Hatman Thoroughbreds and trained by Phil Schoenthal.

"Argentesque is out of Georgia K, who was out of a mare we bought, Pleasure Point, and bred to Horatius," said McGinnes. "We sold Georgia K as a yearling, and she won impressively as a 2-year-old. But then she got hurt. The owners ran her in a claiming race, and we claimed her back. We bred her to Silver Deputy and she foaled Argentesque.

"We sold Argentesque as a yearling at Saratoga for $250,000 to Marc Keller, but she hurt herself and never ran. We bought her back in Keeneland in foal to Artie Schiller, and that foal is Sonny Inspired. You can't get away from these good families. We sold Sonny Inspired for $20,000, and he's won over $563,000.

The fourth stakes race of the day, the $75,000Star de Naskra, was won by Whereshetoldmetogo, owned by Blck Cloud Stable LLC and trained by Anthony Pecoraro.

MONTE CRISTA, the Md-bred filly syndicated by Country Life Farm, won the $100,000 Riskaverse Stakes for 3-year-old fillies on the turf on Aug. 23 in Saratoga.

By Cape Blanco (Ire) out of Aruban Sandwich, by Alphabet Soup, was bought by Country Life Farm as a 2-year-old.

But occasionally they buy or keep a mare to syndicate and race.

Monte Crista won a Maiden race at Laurel on April 28 and then won two Allowance races, one at Monmouth and one at Laurel, before finishing third in the TaWee Stakes at Indiana Grand race course on July 19.

Trained by Michael Trombetta, Monte Crista breezed at Oklahoma training track in Saratoga before the Riskaverse.

Benefiting from a slow pace, Monte Crista moved to the lead near the five-sixteenths and won by 1 1/4 lengths over the favorite, Tapit Today with Goodthingstaketime another 1/2 length further back in third.

HOTSHOT ANNA,  a 4-year-old filly owned and trained by Hugh H. Robertson and ridden by Antonio Gallardo, won the $100,000 Satin and Lace 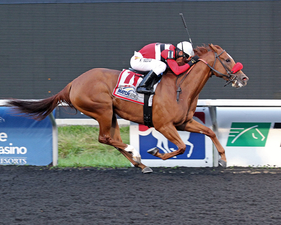 Hotshot Anna tracked the leaders early in the 6 furlong race, took the lead nearing the quarter pole and drew off to win with authority in the time of 1:08.89.

From 17 starts, Hotshot Anna now has six wins, five seconds and one third with earnings of $283,640.

Prior to the Satin and Lace Stakes, she had run mainly in the mid-West, with her latest start having been in the G3 Chicago Handicap at Arlington. which she won.