NEW KENT, Va.--Jamie Bargery rode the winners of both steeplechases races at Colonial Downs on Monday, Aug. 15, coming from behind in the Maiden on Bandua and leading all the way in the Ratings Handicap on Fightinirishtapit. 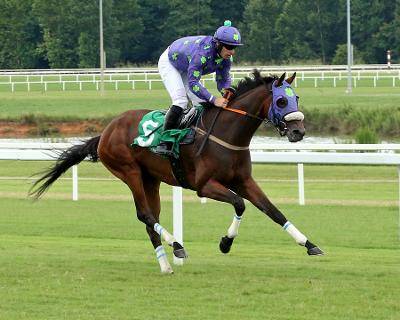 "Fightinirishtapit is a full brother to Mr. Hot Stuff, the Eclipse Award winner trained by Jack Fisher," said Hendriks. "Mr. Denefrio claimed him for $6,000 in 2019."

"When Covid hit, his owner said to just turn him out," said Hendriks.

The gelding only ran three times in 2021, once on the flat, and then ran third at Aiken last March.

"There were only four horses in the race, and nobody wanted to go to the lead, so Jamie said he'd go," said Hendriks.

THAT PLAN worked well as Fightinirishtapit galloped comfortably in front and drew off in the stretch to a big lead and the win by 13 3/4 lengths, finishing in 4:08.00. 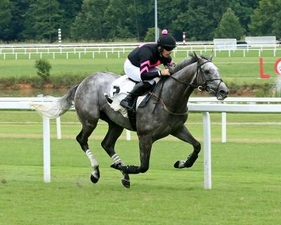 "It just shifts," said Hendriks. "I have more flat horses now, but I love the jumpers. A few of the flat horses switch and will run over fences."

Running in the back of the nine horse field early, Bandua slowly moved up through the closely bunched field, made a big move on the turn to go to the lead and drew off for the win.

Bandua had been a stakes winner on the flat for Calumet in this country after winning twice in Ireland in 2018.

Bandua won the G3 Arlington Handicap and was third in the G1 Arlington Million in 2019 before finishing 10th in the G1 Breeders Cup turf.

He didn't run in 2020 and was third in an allowance at Keeneland before being bought by Smith.