State of Affair wins for Todd Wyatt at Saratoga 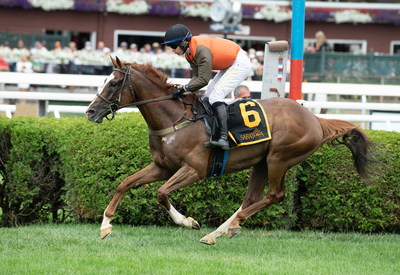 State of Affair under Tom Garner at the wire (Photo by Tod Marks)"I bought him at a Tattersalls sale in 2019," said Wyatt. State of Affair had run in handicaps in England, winning twice.

"He was hurt in his first start in this country," said Wyatt of the gelding's race at Middleburg in June, 2020. "He was brought down by another horse, and both he and the jockey were injured. He was off for a year."

"He came back this year and was third in a maiden race at Shawan Downs," said Wyatt.

"HE RAN okay n an allowance at Saratoga a couple of weeks ago," said Wyatt, who said they then adjusted a few things before the race Wednesday.

Running second at the start, State of Affair went to the lead approaching the sixth fence, widened his lead around the clubhouse turn turn, jumped well down the backside and widened his lead in the stretch to win by 9 1/2 lengths over Take Profit, trained by Willy Dowling and Baltimore Kid (Ire), the favorite trained by Keri Brion.

"I won't take him back to Saratoga," said Wyatt. "Possibly he'll go in the novice at Aqueduct. Or else I'll find a spot for him this fall."