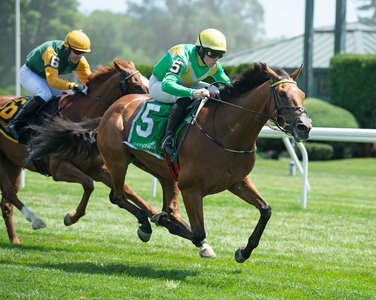 After a breakout first season of training last year, when Brion was the Leading Steeplechase Trainer and trained the Eclipse Award winner, The Mean Queen, Brion said she wanted to do as well in 2022 to prove that last year was no fluke.

Well, she's well on her way to proving that.

Howyabud ran third in the early going in the Kiser while jumping well, and moved up around the turn  to take on Decisive Triumph, trained by Mark Beecher, who had led throughout the race.

Battling through the stretch, Howyabud finally prevailed and went on to win by 1 3/4 lengths.

BRION said that Howyabud tended to ease off once he made the lead.

"He probably could have won by more,"said Brion."Barry never hit him. Howyabud does everything you ask him to do. He's a very uncomplicated horse. He won quite easily."

Going Country (Ire),, trained by Brion, ridden by Parker Henkriks and owned by Blue Streak Racing, Metahorse Racing, CFC Stables and Brion, got up for third after jumping very poorly in the back of the six horse field for the first half of the race.

"Going Country is always lackadaisical jumping early in a race," said Brion. "That probably cost him the win. He made a great move to be third. Both Howyabud and Going Country will race back later in another, longer novice race at Saratoga. They'll both enjoy the added distance. I thought this race would be too short for Howyabud."

"I bought Howyabud for the Naylors while I was in Ireland last winter," said Brion. "He'd just won a maiden race at Leopardstown."

Prior to that win at Leopardstown, Howyabud had been second twice in Weight for Age races at Ballinrobe.

Saratoga was his second start in this country, following a 10 length victory in an allowance race at Great Meadow in May.