Pleasecallmeback wins a maiden steeplechase for Keri Brion at Colonial

NEW KENT, Va.--Pleasecallmeback (On) won a 36,000, 2 1/4 mile Maiden Starter Hurdle race at Colonial Downs in his third recognized start over fences on Aug.1. 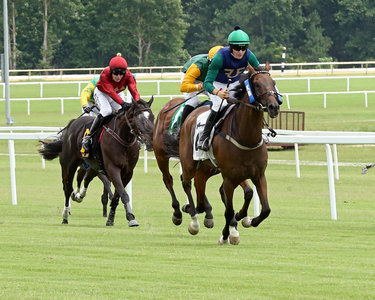 Pleasecallmeback winning at Colonial (Photo by Coady Photography)Owned by Upland Flats Racing, trained by Keri Brion and ridden by Parker Hendriks, Pleasecallmeback started in the back of the 10 horse field, making his way to mid-pack about halfway through, swung four wide on the turn and drove to the lead in the stretch to win by 2 1//2 lengths over Quality Choice, trained by Mark Beecher and La Hara, trained by Neil Morris.

Pleasecallmeback, a 5-year-old gelding, had run about 20 times on the flat, mostly at Woodbine in Canada, placing in a couple of stakes as a 2-year-old before being dropped to allowance and claiming races as a 3- and 4-year-old.

"He was purchased privately by Patrick Lewis (who races as Upland Flats Racing) last fall," said Hendriks. "I won a flat race on him last fall and then rode him in a point-to-point."

"I DIDN'T ride him at Camden, where he got run off his feet and got scared, so we took him back to a point-to-point," said Hendriks. "Then we took him to Radnor, where he was second. He has a lot of closing speed. He's a nice little horse."

Pleasecallmeback had to weave his way between loose horses  through the turn and the stretch.

Neither horse bothered anyone at the fences but were in close quarters in the stretch.