Keri Brion and Jack Fisher have flat success, Motion, Houghton, and McLane Hendriks have winners and Strawbridge has a winner in England

NEW KENT, Va.--Keri Brion had a flat winner in Feminista at Colonial Downs while Jack Fisher prepped Snap Decision in a flat stakes, also at Colonial Downs, for the G1 Jonathan Sheppard at Saratoga. 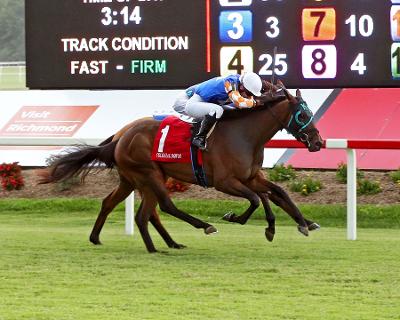 Feminista winning by a neck at Colonial (Photo by Coady Photography)Feminista,, owned and bred by Steinmetz Equine Holdings, won a $25,000, 1 mile Maiden Claiming turf race by a neck on July 26.

"This is the first flat race I've won this year," said Brion. "She's a nice little filly. I used to gallop her mother, Torcida, at Jonathan Sheppard's. I've had Feminista since she was 2. I'll try to find another turf race for her."

Bruton Street-US' Snap Decision ran third in the $150,000, 1 1/2 mile Colonial Cup Stakes on the turf on July 27, just beaten a head after getting trapped behind horses on the turn.

"If he'd gotten through,he'd have been right there," said Fisher. "He ran well."

It's not usual to prep a horse for a steeplechase stakes with a flat stakes, but Fisher isn't a usual trainer and Snap Decision isn't a usual horse.

FISHER has dominated steeplechase racing for years, and Snap Decision, a beautifully bred horse bu Hard Spun, was an allownance winner on the flat for the Phipps before he became a G1 winning steeplechase races.

Fisher didn't run Snap Decision in either of the Saratoga G1 stakes last year because he was going to get so much weight.

"New York racing wasn't happy that I didn't run him up there," said Fisher. "It depends on how much weight we get. If it's an insanely high weight, we won't go. I'm not going to break him down. I asked Bill Gallo what the weights would be, and if it's not higher than 158 we'll go."

Lisheen rated inside for 5 furlongs, moved out on the turn and took command from the four path in the stretch to win by 3 1/4 lengths.

Motion also  had a winner with Leverett and Penelope Miller's Nymph in a $40,250, 5 1/2 furlong Maiden Special Weight at Delaware Park on July 20.

After running second early, Nymph fought head to head in the stretch to win by a neck.

Australian Angel ran second in the 1 3//4 mile turf race until moving up to challenge in the stretch and going on to win by 1/2 length for her third victory.

Houghton also claimed Knockdown Kid for $10,000 for Edward Madden out of a 6 furlong race on July 27.

McLANE HENDRIKS saddled Greyledge Thoroughbreds' Princess Javoncia to win a $29,260, 1 mile Claiming race for fillies and mares on the turf at Laurel on July 16.

Princess Javoncia stalked the pace, was three wide on the turn and won by 1 3/4 lengths.

Ricky claimed Shell Belle for $25,000 for Debra Kachel after the 2-year-old filly won a 5 1/2 furlong race at Delaware Park, and he claimed Thomond Park from a 1 1/16 mile turf race at Colonial Downs for Michael Annechino.