NEW KENT, Va.--Bright Eyed Eagle, trained by Kathy Neilson, won a $40,000, 2 1/4 mile Maiden Steeplechase at Colonial Downs on July 26 in his fifth race in this country since being imported last year. 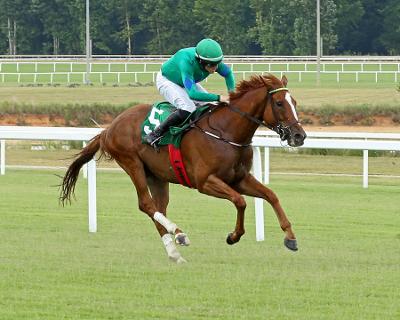 Bright Eyed Eagle winning a Maiden race at Colonial (Photo by Coady Photography)Owned by Nancy A. Reed and Jack S. (Jay) Griswold, and ridden by Barry Foley, Bright Eyed Eagle went to the front after about a half mile and led the rest of the way to win by 4 lengths in 4:04.09 over a fast closing Jimmy P, trained by Keri Brion and ridden by Parker Hendiks.

Beowolf, trained by William Dowling, was third in the seven horse race.

"Tom Garner called me from England and told me about this horse," said Neilson. "I called Nancy Reed and Jay Griswold, both of whom I train for, and they said to buy him."

"He was second in a point-to-point," said Neilson."It took him a little while to figure out American racing. His first times running to the left, he'd bow out to the right. Then he began to figure out how to jump our hurdles."

Bright Eyed Eagle had finished third once with two fourths and a fifth in his previous starts in this country after running 12 times right handed in England, with one win at Ascot in a handicap and three wins in weight for age races.

"BARRY GAVE him a beautiful ride," said Neilson. "Barry and I had talked about a plan for the race. There wasn't much pace in this race, so, the way the course set up, Barry just went to the front. The jumps are really important at Colonial. I was particularly happy to win at Colonial. It's a great course."

"He likes Colonial, so I'll take him back down there for another race," said Neilson. "The season there runs through September."

Hendriks on  Jimmy P was last or second to last through most of the race and was about 20 lengths behind on the final turn, but Jimmy P accelerated through the turn and stretch to fly past horses into second.

"Jimmy P is only 4," said Hendriks. "This was his first run over fences, so I was just going to ride him where he was happy, We weren't really into this to win it but rather to give him something to build on. He finished strongly. He'll probably go in another maiden down here."

Hendriks was driving from Colonial to Saratoga to ride one of Brion's two entries in the $70,000 Allowance steeplechase the following day, July 27.

"I ride Freddy Flintshire," said Hendriks. "It's a pretty competitive race, but my horse has a chance."

"Skylar's taking the summer off," said Neilson. "She just needed to freshen up. She gallops Bright Eyed Eagle and still helps around the barn, but she just felt she needed a brake. She's only 19. But she'll be back riding in the fall."