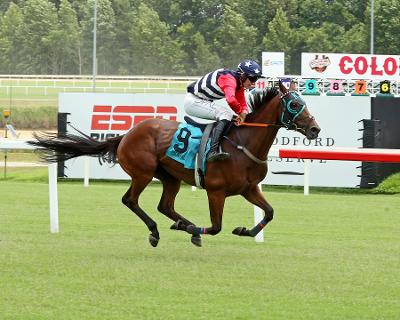 Peat Moss winning a Handicap at Colonial (Photo by Coady Photography)Brion, who was busy in Saratoga with her two entries for tomorrow's steeplechase there, sent her crew to Colonial with Peat Moss.

"I was really happy with Peat Moss today," said Hendriks while driving to Saratoga to ride in a race the following day.

Hendriks said he'd run pretty dismally in England, where he won three weight for age hurdles and two handicaps from 18 starts, and they thought he'd like American tracks better.

"He ran moderately in his first starts here," said Hendriks. "Then Keri turned him out to get some grass and we brought him back."

Peat Moss was second in a handicap at Charleston last November and was fourth twice with one race in which he did not finish.

"KERI HAD SAID to jump him off handily and see where we were," said Hendriks. "He's made some pretty bad mistakes over fences, so I got him reved up for the first fence. I was happy to just sit second. I hit the front too early on him. He's cheeky. He wears blinkers. He's apt to stop when he gets in front. But he had enough to stay on for the win."

"If he comes out of this okay, he'll run back in the same rating handicap at Colonial in a couple of weeks,"sad Hendriks.

Peat Moss ran second behind Bella Coola, trained by Elizabeth Moss, for most of the race, went to the lead in the stretch and won by 3 3/4 lengths in 4:07.51.

Bella Coola was second and Mojave, trained by Leslie Young, was third in the eight horse field.