Dalton's Down Royal won the Smithwick in a stretch duel

SARATOGA SPRINGS, N.Y.--It was a very big day for trainer Kate Dalton and her husband jockey Bernie Dalton at Saratoga on Wednesday, July 20. 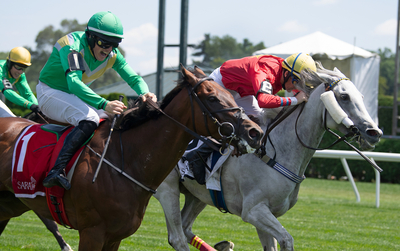 Down Royal, the gray, outduels Chief Justice in the Smithwick (Photo by Tod Marks)As the mare is also a New York-bred,, the Daltons collected not only the $90,000 prize money for first but also the New York breeders and owners awards.

And Bernie also vanned the mare up to Saratoga himself, so the Daltons, and the Daltons alone,, were responsible for Down Royal's win.

The 8-year-old daughter of Alphabet Soup scored the first graded victory of her career after closing from off the pace and extended her win streak to four-in-a-row for the Daltons, dating back to her first stakes score in the Randolph D. Rouse last August at Colonial Downs.

Down Royal closed in the stretch to win by a neck over Chief Justice (GB), trained by Cyril Murphy, with French Light (Fr) third and Historic Heart (Ire) fourth, both trained by Keri Brion.

The Daltons chose Alphabet Soup as a sire because of a horse Bernie had ridden.

They had a mare, Miss Crown, ready to be bred when Bernie rode Italian Wedding to win the New York Turf Writers for Jonathan Sheppard.

"THE MARE was being boarded at the same farm that Alphabet Soup had just been moved to," said Kate. "So it seemed an easy decision to breed her to Alphabet Soup."

Then it was almost by accident that the mare is even still racing.

"As a 2-year-old, we sent Down Royal to the track, and she bled a little before her first race, so we put her on Lasix, and we kept her on it."

Down Royal ran three times on the flat and then switched to hurdles as a 3-year-old, running first or second in allowance races and second in a couple of stakes from 2017 to 2019.

"We were going to retire her after 2020, as she'd been a little lackluster racing," said Kate. "We turned her out and she got big and fat, and we were going to make her a show horse. But then the person we were going to send her to got Covid, so we put her back in work. Bernie said `Try her without Lasix. We have nothing to lose.'"

The results were dramatic.

Since running without Lasix, Down Royal has run six times, winning four stakes and a handicap and finishing second in another stakes.

"She won at Iroquois, and then we had a choice of a race at Colonial or here," said Bernie, who has ridden her in all but one of her jump races. "We put her here because we thought she'd get a light weight, and we hoped maybe she'd be third."

"I was speechless pulling up," said Bernie. "I couldn't believe we'd won it. We'd have been happy with third or fourth."

Kate Dalton said it was not until late in the race that she was confident Down Royal would pull off the victory.

“About a stride before the wire,” said Dalton. “She was coming around the far turn and moving forward into third and frankly, I was delighted with that. The others were backing up and if she ended up staying where she is and being third, it would be a great run. But then she got up to second and it didn't look like she was going to pass Chief Justice and I was delighted with second, but she just kept giving 100 percent. It's what she does. I don't know why she's suddenly got so good, but she has.”

The win was the second Grade 1 victory at Saratoga for Dalton, who sent out Diplomat to upset the 2017 G1 New York Turf Writers Cup Handicap [now the Jonathan Sheppard], also with Bernie in the irons.

“I didn't think I was coming here to pull a Diplomat, but apparently I was,” Kate said.

“This filly got me my 100th winner as a jockey at Nashville over jumps in America and you can't write that script,” Bernie said. “To come here and win a Grade 1 on a filly that you bred and have ridden probably 99.9 percent of the time in our eight years, you can't describe the feeling it gives you to accomplish this.”

Horses in stakes races must now run without Lasix, and that had a big effect on the race.

Pre-race favorite Pistol Whipped (Ire) struggled over the third fence, jumped badly over fence five and was pulled up, having bled.

Iranistan, trained by Brion, had led or been near the lead until last in the race, when he faded, and Brion said he had bled.

French Light, who was third for Brion, had to be vanned off after the race.

Brion said he was lame and they x-rayed him.

"The x-rays of his right hind are clean," said Brion. "Hoping he just banged it on the last fence when he made a mistake. He ran a very brave race. He's on his way home."

Brio said Historic Heart had a bad fence second to last that probably cost him the race.

"Can't always be our day," said Brion, who won both grade ones at Saratoga last year. "But I'm so happy for Bernie and Kate."