Arch Kingsley has his second steeplechase maiden winner at Colonial

NEW KENT, Va.--Arch Kingsley had his second wire to wire winner at Colonial Downs on July 18. 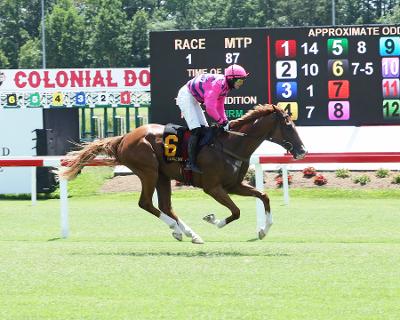 Hurtgen Forest winning at Colonial (Photo by Coady Photography)Carrington Holdings LLC's homebred Hurtgen Forest, ridden by Mark Watts, won the $10,000, 2 mile Maiden Hurdle race by 3 3/4 lengths after going straight to the lead from the break, and he was clearly in command at the finish.

Hurtgen Forest is named for Hurtgen Forest, which is located in Germany near Belgium and was the site of a fierce battle between American and German forces in World War 2.

Hurtgen Forest is a 4-year-old gelding by Americain out of Bourbon Twist.

"We bought Bourbon Twist in 2013," said Kingsley. She'd won a maiden race at Saratoga and had been second in an allowance. But she got hurt, so Bill (Price, owner of Carrington Holdings) sent her to the breeding shed."

"THIS IS her third foal," said Kingsley. "Her first foal won on the flat at Belmont. Her second was Cainudothetwist. Hurtgen Forest is a full brother to Cainudothetwist."

"He's a big, lovely horse with a big, beautiful stride," said Kingsley. "Going right to the front wasn't exactly the plan, but Mark gave him a great ride."

He ran in five maiden special weights as a 3-year-old with his best finish a fourth at Colonial, and then started in an allowance hurdle race at Colonial in November of his 3-year-old year, finishing fourth.

"He was second in a maiden special weight at the Queen's Cup in April, and then we ran him back in an open maiden at Iroquoiis, so he's had a little bit of hurdle experience. So he was in a better position today. He looked comfortable out there. I'm sure Bill Gallo will be pressing us to go to Saratoga, so we'll consider Saratoga."