Keri Brion wins her second race at Colonial, this time in a handicap

NEW KENT, Va.--Keri Brion saddled her second steeplechase winner at Colonial Downs on July 18, this time in a handicap, having won a maiden race in Colonial's first jumping race of the summer season last week. 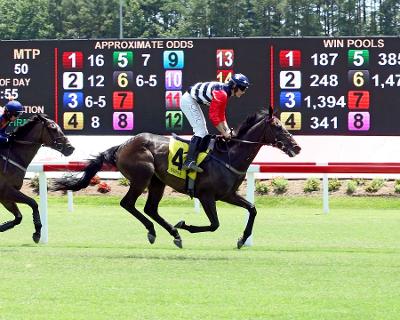 Theocrat raced far back early in the race, with 8 or 9 lengths separating him and Jump Ship from the main body of the field, moved up around the last turn and went on for the win.

"He came over from Ireland on the same plane with New Appointment, who won the maiden race last week," said Brion. "He's owned by the people who own Historic Heart."

Theocrat had run numerous times in England, winning a couple of races over there.

"HE CAME in May," said Brion. "They sent him over here because the prize money is so much better here."

"The maiden races at 2 miles are just a free-for-all," said Brion. "They all just go as fast as they can. This extra quarter of a mile helped him."

"I told Parker, `Don't rush him off his feet,'" said Brion, who said Theocrat had had some questionable jumping in England. "They all went so fast at the beginning of this race. Theocrat began to get his confidence when they were coming back to him. That extra quarter of a mile made the difference."

"He's won three races now, so he's not a novice any more," she said. "I'm not sure what he's going to do next. He's also not a grade one horse, so you may not see him until the fall."

"Arch did a great job of training the winner of the first race," said Brion. "He's won two maiden races at Colonial now. He was great as a  jockey, and now he's a good trainer."