Ancient Times an impressive winner over fences at Colonial 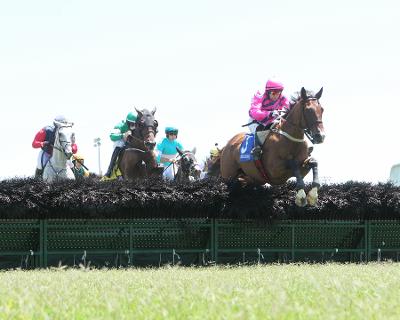 Ancient Times leads over the last fence at Colonial (Photo by Coady PhotographyAncient Times led for the whole race and kicked clear in the stretch to win by 2 3/4 lengths.

"He's a really nice horse," said Kingsley. "WinStar paid over $300,000 for him as a weanling, so you know he's a good looking horse. He broke his maiden in 2020 at Saratoga as a 3-year-old, and then ran badly at Belmont in October."

Ancient Times was in the November Keeneland Mixed Sale a month later, and was sold for $10,000, bought by Bill Price, owner of Carrington Holdings.

"We left Kentucky and Bill said, with his usual dry humor, `Well, we came back with Covid and a lame horse,'" said Kingsley.

"Bill sent him to Kentucky for a stem cell procedure and then gave him a year off at his place," said Kingsley."We started him up again last winter, and he always schooled well, but we never asked him for speed. He has a lot of class. He's really nice looking."

ANCIENT TIMES' first start over fences was at Charlotte in April, where he led easily until he put in a bad jump late in the race and lost his rider. 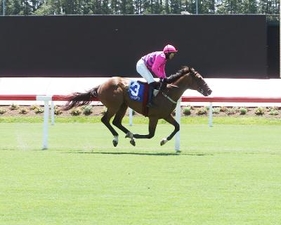 Ancient Times wins at Colonial (Photo by Coady Photography)"I thought that race was setting  up to be like this race until that fence," said Kingsley. "Some of the other trainers in this race thought highly of their horses, so it's nice to win a race like that. He'll go to Saratoga next."

"Three riders were fined $250 under the new HISA rules for excessive whipping," said Kingsley. "They were Mark Watts in the other race, not on out horse, Jaimie Bargary and Ross Geraghty. They said they weren't sure Mark hit the horse more than six times but they fined him anyway."

Kingsley said he didn't know that if a jockey was fined a second rime for excessive whipping in a specific amount of time that the owner would lose the purse money.

Kingsley said he stables nine horses at Colonial with his daughter Taylor and Watts as his assistants.

"I have a couple of nice flat horses along with the steeplechase horses," said Kingsley.