STANTON, Del.--The Hendriks family had a good run of three wins, including a Stakes win, the last week in June and first week in July. 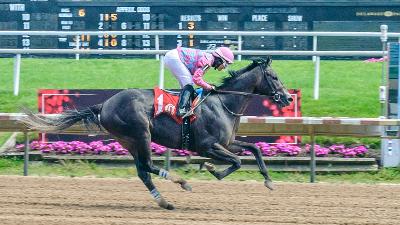 Witty winning at Delaware Park (Photo by Hoofprints Inc.)Wendy Hendriks had a winner trained by son Ricky, the trio of Wendy and Ricky Hendriks and Debra Kachel had a winner, also trained by Ricky, and Wendy's grandson McLane Hendriks trained a Stakes winner.

Also during that period, Graham Motion had four winners including two Stakes winners while Alpha Racing, of which Russell Jones is a partner, and George Strawbridge had important winners in Ireland and England.

McLane Hendriks saddled his mother's homebred Witty to win the $50,000, 6 furlong Stanton Stakes at Delaware Park by 5 lengths on June 29.

"He's a really nice horse," said McLane. "He did it all himself. We put him back on dirt after trying the turf at Penn National, and we wanted a place where he could get his confidence back."

Witty has now run six times with four wins, three in stakes, after finishing second in his first start, a maiden race, all of those five on dirt..

HIS ONLY bad race was in the G2 Penn Mile Stakes on the turf at Penn National on June 3.

"You have to throw that race out," said McLane. "It was very soft turf up there. We put him in that race because his family likes turf. But you couldn't tell anything from that race because the turf was so soft. But for now, we'll stick with what he knows. We have a few options of where to go next, a few local as well as Monmouth and Saratoga."

"I have 17 in training now, all at Fair Hill," said McLane. "Plus I've been doing a lot of riding. Taylor Letterman, who came up through pony racing, has ridden Witty all along, and she's done a wonderful job with him."

GRAHAM MOTION had two Stakes winners on July 2, one in a dead heat in Canada and one at Delaware Park.

ALPHA RACING'S Keepupwithmyempire, trained by Jessica Harrington and ridden by Shane Foley, won an Irish EBF Median Sires Series $28,500 race for 2 year-olds at Naas in Ireland by a widening 4 lengths on July 2.

"It was a great race for him,"said Jones. "He beat the two favorites."

On the same day at Haydock, GEORGE STRAWBRIDGE'S Free Wind (Ire), trained by John and Thady Gosden, won the $155,500, Group 2 for fillies Lancashire Oaks by 3 lengths in an extraordinary exhibition of guts and ability.

About 1 1/2 furlongs from the finish line, Free Win, on the inside, was smashed against the rail by Eshaada, not once but twice.

How she even stood up was amazing, perhaps being pinned between the horse and the rail kept her on her feet.

But she dropped back behind Eshaada, who eventually finished third, swung out and around horses and went on to win by 3 over Sea La Rosa(Ire).

Rated inside early,Bourbon Music swung three wide on the turn and drew away to be by far the best.