BENSALEM, Pa.--Last year's Horse of the Year, Chub Wagon, bred and  parially owned by Danny Lopez, made her 2022 debut a winning one, with jockey Silvestre Gonzalez aboard, in the $100,000 Power by Far Stakes on June 27, at Parx Racing. 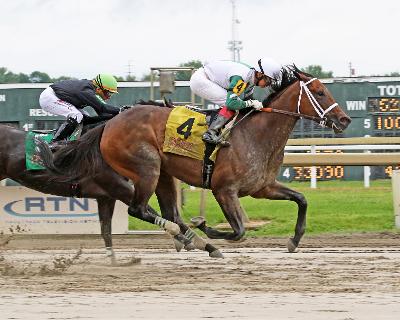 He retired from training in 2020 but retains an interest in Chub Wagon, whom he co-owns with George Chestnut.

Chub Wagon, a 5-year-old Pa-bred mare, is now 11 for 12 lifetime under the training of Guadalupe Preciado.

She won her first race, a Waiver Maiden Claimer, at Parx on Nov. 16, 2020, then won three allowance races before beginning her stakes career.

From April of 2021, Chub Wagon has run in eight stakes, winning seven and placing second in the eighth.

The 4-year-old gelding won by 1 length after being rated mid-pack for 6 furlongs and the going three wide into the stretch.

BERNIE HOUGHTON had another winner for Hillman Racing, Amigos Guitar, bred by his mother Betsy Houghton, but the 3-year-old gelding was claimed by trainer Kimberly Graci.