WILMINGTON,, Del.--While Graham Motion was in England saddling Spendarella to place second in the Coronation Cup at Royal Ascot, he still had three winners in this country, two at Delaware Park and one at Belmont. 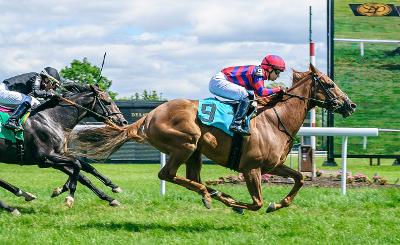 King Vega winning at Delaware Park (Photo by HoofprintsInc.com)"I'm very proud of how the filly ran," said Motion of Spendarella's second. "She just got to Churchill today (Thursday, June 23), where she'll be in quarantine. Most likely she will point now for the Del Mar Oaks."

Motion said that he was"immensely disappointed" that the turf track at Fair Hill was still not open after almost three years.

He said if trainers had known how long the track would be unusable they might not have gone along with plans to redo the track.

"It's incredibly frustrating to drive by it every day and not be able to use it," he said. "I would have used it two or three times to get Spendarella ready to go to England." 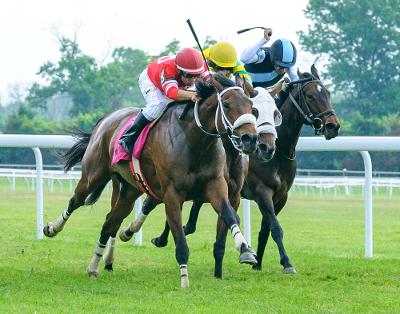 Klaytons Kandy winning at DelawarePark (Photo by HoofprintsInc.comKen Kachel bought Klayton's Kandy for $15,000 at the Fasig-Tipton Kentucky Mixed Sale in February, so with the 4-year-old filly's winning purse of $26,400, she's already paid for herself.

MICHAEL MATZ saddled Runnymoore Racing's In a Spin to win a $35,590, 1 1/8 mile turf Starter Optional Claiming race by a neck at Laurel on June 18.

"She had some growing pains, but she's been fine for us since," said Matz on the 4-year-old Hard Spun filly. "We've run her five times and she's won three times. She's a Pa-bred and she's Delaware certified, so we'll keep her at this level so that she's competitive."

Matz' son Alex recently returned from a European tour where he competed in two Nations Cup classes for the U.S., going double clear in the Lisbon Nations Cup and contributing one clean and one 4 fault round in the Madrid Grand Prix.

"We've been really proud of him," said Matz. "DD went over with him. He made a good account of himself. This was his first time riding on a U.S. team, so hopefully this will get him more involved with the team. We have a few good young horses that people have bought for him that we're excited about."

Reserved early, Midnight Hauler was four wide in the stretch and closed full of run to win by 2 lengths.