MALVERN, Pa.--Leslie Young saddled three of the five winners at the Radnor Hunt Races on May 21, including Court Ruler (Ire) in the $30,000, 2 1/8 mile Rating Handicap Hurdle. 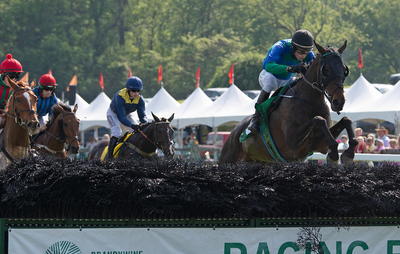 Court Ruler jumps the last in the Ratings Handicap (Photo by Tod Marks)On an unseasonably hot and humid Saturday in May, with temperatures reaching the mid 90s, there appeared to be only one horse adversely affected by the weather, and that one was quickly administered to and recuperated quickly.

"My horses didn't have any issues," said Young. "We made sure they had plenty of water, fluids,and we gave them electrolytes."

Leipers Fork Steeplechasers' Court Ruler, ridden by Harry Beswick, won the Handicap by 1 length over Animal Kingston, trained by Neil Morris in a 10 horse field in which six finished and four pulled up.

"I was very happy with Court Ruler," said Young. "We got him in Ireland because he was a bleeder. But he didn't bleed today. Harry gave him a beautiful ride, just stalked the pace and came on to win. Do I think he's stakes materiel? No. We'll see what his rating is, and maybe make him a timber horse."

LEIPERS FORK Steeplechasers' Tomgarrow (Ire), ridden by Freddie Procter, won the $20,000, 3 mile Open Timber by 15 1/2 lengths over Charlie Fenwick's Royal Ruse, trained by Sanna Neilson, the only two finishers in a race that had scratched down to just three horses.

"Freddie just let him pop out to where he was comfortable and let him roll down the hills," said Young of Procter's ride on Tomgarrow, who led comfortably for the whole race and was hand ridden to the finish.

Ballybristol Farm's Cause for Pardon, ridden by Tom Garner, won the $10,000 Maiden Starter Hurdle by 13 lengths over Pleasecallmeback, trained by Keri Brion.

"He's such a fun horse," said Young. "We claimed him for $10,000. He's gotten a lot of seconds and thirds, but this time he just galloped to the wire. I wanted to make him a timber horse, but the owners wanted a hurdle horse. He may go to Colonial, or maybe we'll turn him to timber."