Graham Motion saddled three winners in one day, including a G1 Stakes winner, while Houghton had five winners and Matz, Dickinson and Jenkins also scored 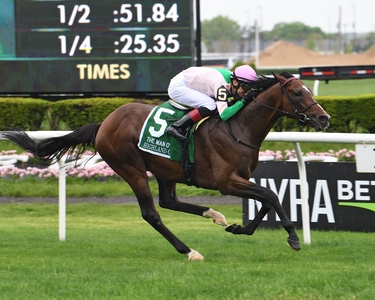 Highland Chief winning the Man o' War Stakes (Photo by Janet Garaguso)He is also still planning to take Spendarella to England to run in the Coronation Cup at Ascot on Friday, June 17..

"Spendarella will leave on June 7," said Motion. "We'll go over the week of the race. I'll probably breeze her the Monday before the race."

Mrs. Fitriani Hay's Highland Chief, in winning the Man o' War, ran second early on, swung four wide into the stretch and went on to win by 1 length in only his second race in this country.

The 5-year-old stallion had previously run in England, where he was stakes placed.

"He came to me last fall," said Motion. "We gave him a little break and then ran him in an allowance race before this race. He'll run in the Manhattan on Belmont day."

Motion also had two winners at Pimlico on May 14.

"It was a really good day," said Motion. "It's been a while since I had a day that good, Highland Chief is an exciting horse. Grade one races are hard to come by."

MOTION had another stakes winner in True Valour (Ire) at Laurel on April 23.

Motion has had five other winners over the past few weeks, beginning with Stonestreet Stables' Willakia winning a $100,000, 1 1/16mile turf Maiden Special Weight for3-year-old fillies at Keeneland on April 15.

Houghton also saddled two winners for his mother Betsy and one for himself.

MICHAEL MATZ saddled Runnymoore Racing's In a Spin to win a a $36,928, 1 mile Starter Optional Claiming race by a neck at Laurel on May 1.