KENNETT SQUARE, Pa.--While Leslie Young was in Nashville, Tenn., saddling two winners at Iroquois, three of her horses won at Willowdale Steeplechase on May 14, propelling her into the lead in both Trainer, Races Won and Trainer, Money Won. 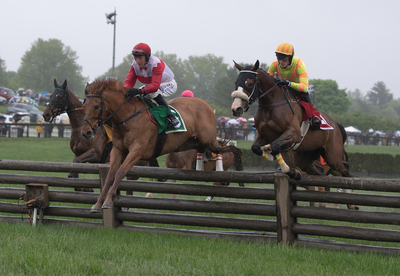 Andi'amu ran second for most of the race, going to the lead on the final turn and extending for the win.

"For years we've followed  the same plan of running him in a steeplethon at Great Meadow and timber stakes at Middleburg and the Gold Cup," said Young. "But after he won the Gold Cup last week, he was bucking and kicking. So when the race at Willowdale came up so light, we decided to enter him. With the end of timber racing now, we'll put him away for the summer and run him again this fall."

"I was disappointed in his performance at the Queens Cup," said Young. "He got into a speed duel there, tired, and was pulled up. We wanted an easier spot for him for his confidence. He got weight off with Freddie ridding."

"Mojave is a lovely horse," said Young. 'I bought him at a Tattersall sale. We ran him at the Gold Cup during Covid, and we put blinkers on him for that race. That made him so keen that he go a tendon."

This was his first race back after a year's lay off.

"We'll run him next at Colonial," said Young.

"It's fantastic," said Young of moving into the lead in both Trainer, Races Won and Money Won. "I have a great staff. Our training track is still  only halfway done, so they jogged the horses on roads all winter. And I have great owners that let us pick the spots best for the horses."

Jack Fisher, while saddling winners at Iroquois, also had a winner at Willowdale with Riverdee Stable's Twenty Years On (GB), ridden by Teddy Davies.

Twenty Years On went to the front and extended his lead to win by 31 3/4 lengths over Don't Shout (Ire), trained by Young.

"Teddy rode him great," said Fisher. "I though he and the horse would go together."

Fisher said it was great to see young American riders like Davies, Parker Hendriks, who is currently the leading steeplechase jockey, and Skylar McKenna all winning races.

"We need to support them,"said Fisher.

He rode Buttonwood Farm's The Silent Trainer, trained by Keri Brion,, to win the $15,000 Maiden Timber by 1 3/4 lengths over Tiepolo, trained by Elizabeth Korrell and ridden by her daughter Virginia.

Our Friend won by 5 3/4 lengths over Mercoeur (Fr), trained by Young.