NASHVILLE, Tenn.--Facing Pistol Whipped (Ire), a touted hurdle winner from across the sea, Snap Decision, ridden by Graham Watters, hung just outside his foe during the $150,000, G1, 3 mile Calvin Houghland Iroquois Stakes, went into the lead on the final turn and went on to win by 7 1/4 lengths on Saturday, May 14. 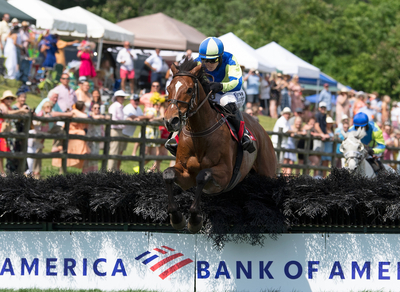 "He's the horse of a lifetime for us," said Charlie Fenwick, who along with Mike Hankin and Charlie Noell owns Bruton Street.

Snap Decision's win, along with the win of another Bruton Street horse, Proven Innocent, showed why Fisher has dominated the Leading Trainer lists for so many years.

"For both races, Jack laid out a plan, and then the jockeys executed the plans perfectly," said Fenwick.

Pistol Whipped, trained by Nicky Henderson, was a handicap hurdle winner in England and had been expected to be a serious contender in the seven horse field, and he did finish second, 2 1/4 lengths in front of Amschel (GB), trained by Cyril Murphy.

But Snap Decision, a beautifully bred class horse, ran back to his top form and looks to be a force to deal with this summer.

Two other Fisher trained horses, Moscato and Brianbakescookies, were fourth and fifth respectively.

Iranistan, who won the Temple Gwathmey over Snap Decision, was done early and was pulled up, as was Historic Heart, both trained by Keri Brion.

Fisher said that Anthony Speelman's Pistol Whipped had been brought to this country to be sold, but that he wasn't interested in buying him and didn't know if anyone had bought the horse.

FISHER HAS said in the past that he wouldn't run Snap Decision in Saratoga, as both grade one races there are handicaps,and he would get loaded down with too much weight.

But Fisher said, after the Iroquois, that he had heard that Saratoga officials were unhappy that Snap Decision hadn't run there last year, so that he was considering possibly sending him this year.

"I might do it for steeplechase racing," said Fisher. "I need to talk to the owners first."

"The plan was for him to come with one run," said Hankin, who recently finished a four year tour of duty with the Marines. "I'm the one who just gets to hop on him on the weekends. I was on the right horse today."

"We were hoping for and expecting a good run from him today," said Fenwick.

This was only Proven Innocent's second run over hurdles, having previously run on the flat for Stuart Janney.

Fisher said he had heard Janney was thinking of selling him and bought him after he won a maiden race at Belmont last year.

Henderson wasn't the only trainer who crossed the seas to take advantage of the huge purses at Iroquois.

Gordon Elliott brought Burn the Evidence (GB), now owned by Del Rio Racing and going to Ricky Hendriks to train, over to run in the $50,000 Filly and Mare Hurdle Stakes, where she ran second to Down Royal, trained by Kate Dalton.

Elliott recently served a six months suspension after an old photo was dug up that showed him sitting on a dead horse to keep wild animals from eating him while waiting for the van to pick him up.

After the filly and mare stakes at Iroquois, Fisher and Elliott were riding back to the stables in a golf cart with Hendriks in the back.

"I said to Gordon, `You're a slow learner, Why didn't you take the advice of your horse, and burn the evidence,'" said Fisher. "I heard Ricky laughing in the back, but Gordon never said a word."

LESLIE YOUNG saddled two winners at Iroquois, and those two, along with three wins at Willowdale the same day, propelled her into a four race lead in Trainer, Races Won, and also into the lead in Trainer, Money Won, with Brion standing second and Fisher third in both.

"I bought him last summer for 100,000 euros after he won a race in France," said Young. "He was running well at Far Hills last fall when a horse fell in front of him. He prefers a bit of a cut in the ground. This is his owners home meet, so his winning here was great. We'll see what his rating is and that will determine if he runs at Saratoga."

"I actually wanted to jump out in front, because he's a bit keen," said Garner. "But Mikey (on Chosen Mate) gave me a good lead."

"He's a good horse," said Young. "I bought him at the Tattersall sale last year. "I think highly of this horse. They'll both run back this fall."

"Every timeI sit on this horse he keeps improving," said Foley. "He's a tricky horse because he needs to drop in behind. I wasn't concerned with being so far back. I know I couldn't go any faster so I figured they couldn't either."

"I was a lot more concerned on the backside than Barry was," said Murphy. "But we kept to a plan and it worked."

Dalton saddled Joseph Fowler's Down Royal, ridden by Bernie Dalton, to win the $50,000 Filly and Mare Stakes by 2 3/4 lengths over Burn the Evidence, ridden by Davey Russell, who went into the lead at the start.

"Davey's horse was jumping green the first time around," said Bernie Dalton. "I just took advantage of that. Down Royal has been the apple of my eye since the day she was born.  And, as old as I am, any win is good."