Keri Brion saddled three winners at the Queen's Cup, including French Light in the Novice Stakes

MINERAL SPRINGS, N.C.--Keri Brion saddled three of the five winners at the Queen's Cup on Saturday, April 30, including French Light (Fr) in the $50,000 Queen's Cup Novice Stakes, and she  moved into the lead in Trainers, Races Won by one race over Leslie Young. 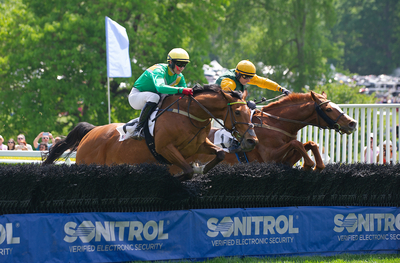 Irv Naylor's French Light and Port Lairge Stables and Holwood Stable's Decisive Triumph jumped the last fence together, and French Light, ridden by Parker Hendriks, pulled ahead to win by 3/4 length in 4:40 1/5 for the 2 3/8 mile race.

"French Light is a really nice horse," said Brion. "He's my favorite horse in the barn. He's no longer a novice after that race. He was rated at 124 before the race, so he'll probably stay in the 130 rated races. He'll go to Saratoga for either the 130 rated races or one of the stakes.."

"THAT WAS a surprise," said Brion. "He's a nice little horse. He didn't cost very much. Parker gave him a great ride. It looks like he's a nicer horse that I thought."

Spring Heeled Jim, who was running in his first race ever, was still in third jumping the last fence but came with a huge run in the stretch to win.

"The owners haven't even been in American racing for a year, so it was great for them," said Brion. "He'll probably go to Radnor. He needs more racing. It's a blessing and a curse when a horse wins first time out. Maybe after that, he'll go to Saratoga."

Upland Flats Racing's Freddy Flintshire, ridden by Hendriks, won the second division of the $30,000 Maiden Hurdle, beating Hurtgen Forest, trained by Kingsley, by 1 1/4 lengths, finishing the 2 1/8 mile race in 4:08, the same time as the first division.

Hendriks has said that Freddy Flintshire is a cool horse and one of his favorites.

"He's a barn favorite," said Brion. "I ride him every day. He's a sweet, kind horse. Qatar Racing owned him and raced him on the flat, but he was slow leaving the gate. His trainer told me because of that he should run over fences. He ran at Charleston last year as a 3-year-old and was third, but he was very green jumping. We did some more jumping with him, and then he was third at Aiken earlier this year. I'm excited to have him for Saratoga."

The Mean Queen had a slight injury that caused her to miss a few days of training, but Brion said she's back in training now.

"We'll have to decide whether to run her at Iroquois or wait for Saratoga," said Brion. "She won't run in the Smithwick, they'd put too much weight on her. Maybe she'd go in the Sheppard. She gets the mare allowance. Or there's a $100,000 mares race at Colonial. But our main goal is Far Hills."