LEESBURG, Va.--Parker Hendriks, at only 18 years old, is not only National Steeplechasing's Leading Jockey in both Races Won and Money Won, but he is also piling up wins on the point-to-point circuit. 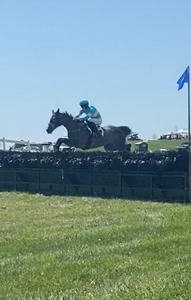 Montmartre D'Ange winning at LoudounHe won three races at the Loudoun Hunt Point-to-Point on Sunday, April 24 after winning three, including the G2 Temple Gwathmey Stakes, at Middleburg Spring Races the day before.

At Loudoun, he won the Maiden Hurdle on Madaket Stables, CFC Stables and Paul and Molly Willis' Monmartre D'Ange, trained by Keri Brion, by 1 1/2 lengths over City Dreamer, trained by Jack Fisher.

"This was Monty's first run ever," said Brion. "One of his owners is Sol Kumin, who is Madaket Stables. He is one of the biggest flat owners in the country. He owns part of Justify. It's a big deal to have him own a steeplechase horse. Monty is going to the maiden race at Nashville."

Hendriks next won on Buttonwood Farm's Baltimore Kid, also trained by Brion, in the Maiden Flat.

"It's fantastic." said Hendriks of his wins this season. "I work for Keri, and she made me stable jockey this year. I've been working for Keri for three years. I started when she was assistant trainer to Mr. Sheppard. It was just me and another girl that went with Keri when she became a trainer. I also ride a few for my mother (Sanna Neilson) and for Neil Morris."

"Week days, I usually ride about four in the morning and then go to school at Westtown, and then weekends it's racing," said Hendriks. "Keri keeps me pretty busy. I'm really lucky to be riding these horses."

"I HAVE a few favorites," he said."Historic Heart is a real character, and Freddie Flintshire is a really cool horse. And Iranistan. I've ridden him every day for the last four months."

"Iranistan was perfect last Saturday," said Hendriks, referring to his win in the Temple Gwathmey. "At the start, everyone just stood there. Plan A was to drop out the back end and be last in the beginning. But no one went, so I did. It's great to ride for Keri, because she understands things change. Initially, the plan was that if Snap Decision came to me at the third to last, I would just let him go and be second. But he came to me later, and I thought, if we're going to win this, we have to go now. Iranistan would have run through a brick wall for me that day. I was in a state of shock when we hit the wire in front."

Hendriks was also second on A Silent Player in the Steeplethon, a race he said he's ridden in a few times now.

"A Silent Player had won a hurdle race, and he'd run through his conditions last year, so I said to Keri, `Let's put him in the steeplethon. We took him to my mother's and schooled him over timber. He jumped about 10 timber fences there, and that was the only schooling he had over timber. He went in the steeplethon at Great Meadow and was second and then won a timber race. At Middleburg, he jumped fantastic, but I couldn't make the hairpin turn, and I was second. That was the eighth race I rode that day. I couldn't have ridden another."

"Parker is really dedicated," said Wendy. "He's made a study of horse racing. He knows all the horses' pedigrees. If I need to know something, I call him up. I love watching him ride."

McLane is riding Rocket Star Red in the Maryland Hunt Cup Saturday, and Wendy has a busy weekend.

"We're going to the Keeneland sale Friday," she said of her trip with son Ricky, the father of McLane, Liza and Parker, to Kentucky to buy horses. "Then we're flying back early Saturday to go to the Hunt Cup. It's all pretty darn exciting."

Wendy not only had a grandson riding three winners at Loudoun, she herself also had a winner at Loudoun with her Embrace the Grind, trained by Ricky and ridden by Mike Hamill in the Open Flat.

Jack Fisher saddled the winner of only other hurdle race at Loudoun, the first division of the Maiden Hurdle.

"Beat Le Bon ran in Breeder's Cup preps on the flat, but he wan't quite good enough," said Fisher."He'll probably run in the flat race at the Gold Cup."