Mark Beecher saddled Road to Oz to win the Grand National Stakes, and Will O'Keefe retired as race announcer

BUTLER, Md.--Holwood Stable's Road to Oz, a 7-year-old grey gelding in just his second year of competing in timber races, is now a stakes winner. 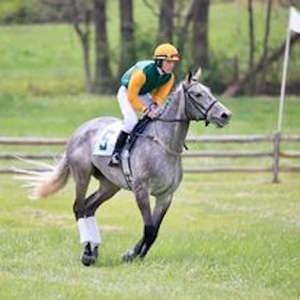 Road to Oz ran fourth in the six horse field early in the race and then began picking his way up through the field until he went to the front three fences from home.

The grey gelding and Awesome Adrian jumped the last head and head, and then Road to Oz went on to a comfortable win.

While the Grand National is often a prep race for the Maryland Hunt Cup, Road to Oz is not entered in that race, although another of Beecher's horses, Rocket Star Red, who was second in the Allowance timber two races after the Grand National, is aimed for the Hunt Cup.

"I've had him about two and a half years," said Beecher, who ran him, unsuccessfully, in two hurdle races in 2020 before switching him to timber.

"He won the maiden race at the Manor last year in his first start over timber," said Beecher."He was then third in a stakes at Middleburg and won the allowance race at the Pennsylvania Hunt Cup. So now he's done two of the big timber races."

ROAD TO OZ prepped for the Grand National at the Cheshire races in March, finishing third in the allowance race there.

"He's a puppy dog in the barn," said Beecher. "He's the quietest horse we have."

"It means a lot to win the Grand National," said Beecher. "It's a very big race in Maryland, and it has a lot of history. Maryland has been my base since I moved to this country, and a lot of my owners are from Maryland, so it means a lot that way, too."

"This was my first win in the Grand National as a trainer, although I won it as a rider on Ravens Choice in 2016," said Beecher.

"Riding was way easier," he said. "When I was riding, I was fully in charge. As a trainer, I do all the work, and then I give a jockey a leg up and he's in charge. I get a kind of a sick feeling having just to watch. The jockeys sometimes do things differently than I would have done, but they're the rider. The toughest thing as a trainer is getting used to watching. But I've been training now for two and a half years, and I'm getting better at it."

"The Grand National was the main goal for Road to Oz for this year," said Beecher."He may go to Willowdale, but we'll play that by ear. He's pretty happy with himself right now."

Will O'Keefe did a very good job of calling the running of the Grand National,  and then following the presentation, Charlie Fenwick announced to the large crowd of spectators that O'Keefe had decided to retire.

Will O'Keefe has announced races through any and all conditions for over 30 years, and the sport owes him a huge debt of gratitude, said Fenwick.

"He has been extremely loyal to the Grand National, and that loyalty and professionalism is greatly appreciated," said Fenwick.

The Grand National officials presented O'Keefe with a plate engraved with the names of all the winners of the Stakes that he had called.

Leslie Young saddled Ballybristol Farm's Boutonniere, ridden by Freddie Proctor, to win the inaugural running of the $10,000, 3 mile Maiden Timber in his third race in this country.

The newly added Maiden race drew a large field of nine, and Boutonniere went straight to the front, led all the way and increased his lead in the stretch to win by 8 lengths over Stooshue (Ire), trained by Cyril Murphy.

Procter returned in the next race, the $15,000, 3 1/4 mile Allowance timber, to win on Upland Partners' Shootist, trained by Todd McKenna over a field that included two horses prepping for the Maryland Hunt Cup.

Shootist led from the beginning, and Rocket Star Red, trained by Beecher, was beginning to make his run at him when he had a very bad fence at the last, pecking badly on landing to loose any chance of winning, but he stayed on for second.

Rocket Star Red is aimed for the Hunt Cup, and the other Hunt Cup entrant, Blackhall, trained by Joe Davies, finished fourth.

Todd Wyatt saddled Riverdee Stable's Include It, ridden by Elizabeth Scully, to win the !0,000 Apprentice Rider Timber by 5 1/2 lengths and set a new track record of 6:06 for the 3 mile race.

Include It was unhurried early, moved up late in the race to be second at the last fence and drew away to win over Mercoeur, trained by Leslie Young.