BERRYVILLE, Va.--Mark Beecher saddled two winners at the Blue Ridge Hunt Point-to-Point on April 17, including one for a new steeplechase owner and one horse aimed for steeplechasing that was a very classy winner on the flat. 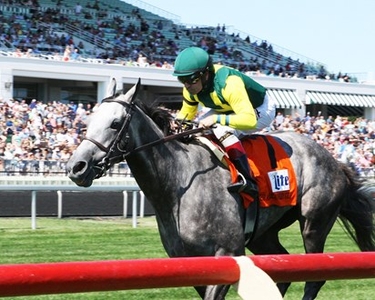 Flying Pheasant Farm is owned by Sean and Megan Dobbs.

"Felix Leiter is a nice horse," said Beecher. "They're flat owners. I have one flat horse for them. This was Felix Leiter's first start over fences. It's nice to have new owners. We have to get new blood in the sport. He may go to Willowdale or the Gold Cup. I haven't decided yet, but my preference  is for Willowdale."

Felix Leiter raced near the pace and went to the front about halfway through the race,but Shendam quickly passed him  and led until the final fulrong, where Felix Leiter regained the lead and won going away.

Real Story is a homebred gelding who was a graded stakes winner on the turf in his five years of racing from Tampa Bay and Gulfstream to Arlington, Keeneland, Churchill Downs and Laurel.

"HE'S A HALF BROTHER to My Afleet, who won twice for me and was stakes placed over hurdles and then won over timber st Willowdale," said Beecher. "We'll see if Real Story will take to steeplechasing. We'll run him on the flat for now and get him used to the undulations in the ground. He'll go to the 1 1/2 mile flat stakes race at the Gold Cup."

Real Story went right to the front at Blue Ridge and led all the way to win by 1/2 length over Grey Ghost, trained by Joe Davies.

Casey Pinkard also had two winners at Blue Ridge, one on the flat and one over timber.

Pinkard also saddled Frank Bonsal's Profiteer, ridden by Paul Cawley, to win the 3 mile timber by 3 lengths over Mo's in the House, trained by Sam Cockburn.