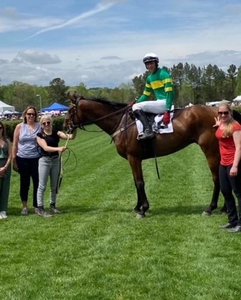 Going Country ran behind Bickley, trained by Jack Fisher, for most of the race and began to make his move after the second to last fence, was slightly in the lead at the last fence and won by 1 length over Bickley, finishing in 3:40 3/5.

"I bought him from the same place where I got The Mean Queen," said Brion. "He shipped over here last summer, but he didn't ship well, and he was very light when he got here. I ran him a couple of times last fall, and he was second at Monpelier. Then he put on weight over the winter and gained a lot of strength. I expected a big run from him, and he didn't disappoint. He wants a longer trip, but I entered him at Tryon hoping class would out, and it did."

"He's entered at Middleburg," said Brion. "He came out of this race like he hadn't even run, but I'm not sure I want to run him back that quick. If not Middleburg, he'll go to the Gold Cup."

Middleburg is Saturday, April 23, and Brion pointed out that Jack Fisher, who had been Leading Trainer 14 times, was finally beginning to race some horses at Middleburg.

FISHER has always waited a little bit later than most trainers to run his horses, a technique that has always worked well for him. 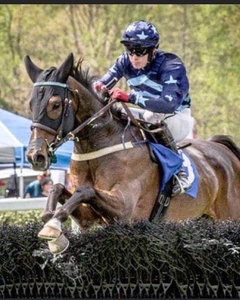 Boulette,+++++++++++++++++++++ ridden by Parker HenriksAnd he has a couple of his big guns, Snap Decision and Moscato, entered at Middleburg in the G2 Temple Gwathmey Stakes.

Brion, who was Leading Trainer, Money Won, last year, has Iransitan also entered in the Gwathmey, and Leslie Young, who is currently the Leading Trainer, has entered Redicean, so begins the trainer's battle for this year.

Boulette went to the front and led for the whole race, leading at times by 15 or 20 lengths.

"Boulette looks to be something special," said Brion. "He improved quite a bit over his race at Aiken (where he also won). I thought his race at Tryon was so much more impressive. His cruising speed is so high that no one can keep up with him. He raced quite a bit in England as a 3-year-old. He's Irish bred, but he raced in England. They have so many more races for 3 year olds in England that we do here. But the soft ground over there would tire him out. He led at Cheltenham until the bottom before the end. He loves the ground over here. Paul Willis made a good decision to send him over here."

"He's going to the 4-year-old stakes at the Gold Cup," said Brion. "It will be interesting to see how he does against horses of his own age. He's only run against older horses over here. But he has so much more experience than most of the 4 year olds over here. Then after that, we'll look at Saratoga."

Graham Watters, who won the Leading Jockey title last year, saddled his first runner as a trainer and won.

Shamrock and Thistle's Make A Stand, also ridden by Watters, won the $15,000 Maiden Claiming race by 4 3/4 lengths over Seville Barber, trained by Brion.

Sevile Barber and Make a Stand opened up a big lead over the rest of the field, and Make A Stand went into the lead after the last fence, finishing in 4:37 3/5.

Watters said, although he has a couple of hunters in his barn, for now Make A Stand is his only racehorse, and he expects to continue riding races for a few more years.