MONKTON, Md.--There were four races at my Lady's Manor on April 16, and Leslie Young and Joe Davies, with two each, won them all, with Young winning the Manor with Tomgarrow  and Davies winning the Apprentice Rider Timber with Vintage Vinnie, last year's runaway Hunt Cup winner. 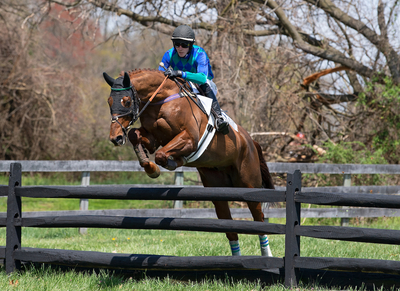 "I was there,"said Young, who had missed the last couple of weeks of steeplechase meets due to Covid. "That was the first time I've won the Manor.That meant a lot. That's one off the bucket list. It was such a treat."

"Freddie Proctor has been a blessing,:"said Young. "It's hard to get the right amateur rider, and we got the right one."

"If he's healthy and happy, Tomgarrow will go to the Virginia Gold Cup," said Young.

Tomgarrow won the International Gold Cup last October for his first stakes win, and he now has four wins and four seconds from 12 starts.

"He's a cool horse," said Young.  "I bought him last May at the Tattersall sale after he'd been second in a point-to-point over there. He was reasonably priced. He was second in a maiden race at Middleburg last fall, and then he was running a great race at the Pennsylvania Hunt Cup when he spooked at a fallen horse and unseated Tom Garner. He jumped brilliantly at the Manor and won easily. We have a couple of options with him, he may go either to Willowdale or Nashville."

"John Greene is a new owner," said Young. "Patrick Worrall wanted to get a horse, and he brought Greene in."

Young is now Leading Trainer in both Races Won and Money Won, leading Keri Brion in both.

"This winter, the staff was jogging the roads for me, getting horses fit," said Young. "I have some great exercise riders. It's all team work."

Young is now stabled in the training center that Jonathan Sheppard previously owned, and she is redoing much of it.

"Half of the new stalls are in," she said. "We hope to have the rest done by the end of next month. We're going to put in a hot walker and a free school pen. The training track isn't finished yet. We have an owner who has allowed us to use his all-weather track."

Vintage Vinnie won the Manor Stakes last year on his way to his astounding performance in the Hunt Cup, which he won by 96 lengths, ridden by Dan Nevins.

"We thought this would be an easier spot," said Davies. "I only had him 90 percent fit, as we're concentrating on the Hunt Cup. I didn't want his going up against all those stakes horses in the Manor."

Vintage Vinnie ran second to Renegade River for most of the race, with the two of them jumping the last two head and head.

"We wanted to see if he'd settle," said Davies of their deciding to have him second for most of the race. "We were surprised, as Teddy seemed to be able to settle him fairly easily. I'd just as soon not see him open up by 100 lengths. that's hard on him."

Vintage Vinnie will certainly be the favorite to win the Maryland Hunt Cup again this year, but who will ride him is still up in the air.

"Dan Nevins had a fall in Ireland," said Davies. "It's not clear if he can make it back here this year. We have two other possibilities, Will Easterbe or possibly Teddy."

Davies said he wasn't sure whether he'd want Vintage Vinnie to go to the front and run away with the race as he did last year.

"I think we'll let him decide," said Davies. "It depends on who rides him, too."

"Our Friend is awfully nice," said Davies. "We ran him in the Team Chase, and then he ran and won at Brandywine. I like to have horses have a few more races in them before they go to the Manor, but he did so well, we ran him here."

"I took the field on him the last day," said Davies, who is Master of Elkridge-Harford. "He was so light. He reminds me of Swayo. He's entered in the Murray at the Grand National. That depends on how he trains this week."