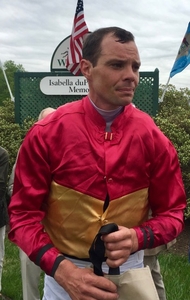 Trainer Mark Beecher at Winterthur while he was still riding races"It was a very brisk pace," said Beecher. "Willy's horse, Broken Force, set the pace and was about 20 lengths clear at times. Brett just sat last, and then began to pick his way through horses. He caught Willy's horse at the second to last fence and went on to win by 9 very easily."

"Cracker Factory did two steeplethons last year that we used as a learning tool to transition him from hurdles to timber," said Beecher. "I don't like to rush horses. He was second first time out this year at Piedmont. He'll probably go to the maiden race at the Grand National."

Broken Force, trained by Willy Dowling, stayed on for second in the five horse field.

"Agravain won a flat race for us a couple of years ago," said Wyatt. "He was coming off an injury,and that was his first hurdle race."

"Lonely Weekend won over hurdles at the Gold Cup a couple of years ago," said Wyatt. "That was his first timber race."