EARLESVILLE, Md.--The Mount Harmon -Wicomico Point-to-Point, a brand new meet directed by Brooke Boyer and Jay Meister, who was also the announcer, was a huge success praised by trainers and spectators alike. 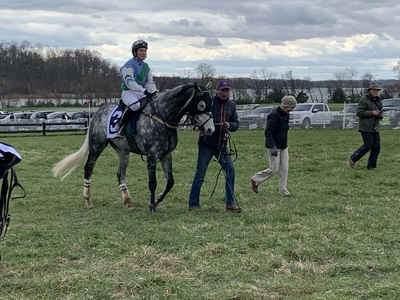 Virginia Korrell led by Brian Korrell with mother Wiss in background"Brooke did a wonderful job to put it on so well," said Leslie Young, who trained the winner of the first timber race. "The fences were great, nice and presentable. There was a lovely tent for the horsemen, and the spread they put on for the horsemen was over the top."

There were a large number of spectators despite the temperature, which hovered in the high 40s, with a large contingent of tail-gaters vying for the winning prize.

The races were well filled, and the meet ran on time, which was much appreciated by everyone.

Young saddled Ballybristol Farm's Boutoniere, ridden by Freddie Proctor, to win the $1,000, 3 mile Maiden Timber by 2 /12 lengths  over Theda's Boy, trained by Kevin Boniface in a three horse race in which Boutoniere went into the lead at the fifth fence.

"I was really happy with him," said Young. "I bought him at a Tattersall sale the year before Covid from Andrew Balding. He's American bred out of a mare Jonathan Sheppard raced. He'd had one win on the flat when I bought him. He was fourth twice over hurdles, but he was too good a jumper, he jumped too high over the hurdles. Then he got a tendon injury, so we gave him time, and this was his first start over timber. He's aimed for the maiden race at the Manor."

VIRGINIA KORRELL rode her own Tiepolo (Ire), trained by her mother Elizabeth (Wiss) Korell, to win the $1,000 Lady Rider Timber by 2 lengths over Manero, trained by Casey Pinkard Savin in a three horse race.

It had rained three inches two days before the meet, and prior to the race, the Korrells had been worried that Tiepolo wouldn't like soft ground.

"It didn't ride as soft as we thought it would be," said Virginia. "The ground was beautiful. He can get a little keen, so the plan was to go to the front. I rode him in two flat races last fall, and he was third in one. I bought him from Leslie (Young). He had a little stifle problem after Willowdale, and she had a lot of timber horses. He was a barn favorite of mine. He was a bit green over some of the fences, but he settled better than I thought he would."

Teddy Davies rode Bogey's Image, owned by H. Goolsby, A. O'Donovan and D. Calhoun and trained by his father Joe, to win the #1,000 Amateur Apprentice Rider Timber by 1 length over Western Crusader, trained by Ricky Hendriks in a two horse race.

"We got him last fall, and we kept him with Sean McDermott," said Joe Davies. "He won at Shawan and was second at Far Hills over hurdles, then Sean thought he was ready for timber. We hunted him all winter."

"I tried to keep him behind, as this was his first timber race," said Teddy. "That was hard, because he was keen. We jumped the last together. He had plenty left in the tank at the end. He's aimed for the maiden race at the Manor."

"I led all the way," said McDonogh, who was shivering from the cold. "I'm Irish, and I'm not used to this cold. I was happy to lead. This was my second ride over timber.He's a really nice horse. He had a good turn of foot to the last."

"I got him from Gordon Elliot last fall after he ran at Far Hills," said Hendriks, referring to the Irish trainer who brought two horses over to race at Far Hills over the national fences.

Hendriks ran him twice over hurdles last fall then started him over timber at Cheshire, whee he said the horse was a little unlucky and finished fifth.

Hendriks said he wasn't sure where he'd race next.

Jaime Neild won the next two races, the first of the two being the $2,500 Open Timber hat he won by disqualification when Lisa Nelm's Arkadag, trained by David Bourke and ridden by Gerard Galligan, was disqualified for interference at the last fence.

"He's a hurdle convert," said Galligan of Arkadag before he realized he'd been disqualified."This was his first timber race. I was happy with the lead the whole way. I'm trying to teach him to rate with him having to go three miles now. He had a little more kick than Willy's horse after the last."

Kiplin Hall's Bowled Over, ridden by Neild and trained by Willy Dowling, was moved to first over Arkadag in the four horse race.

"This was my first time riding him in a race," said Neild. "I've ridden him at home. He was a bit of an unknown going into this, so we wanted to see how he did. He showed us quite a lot."

Erika Taylor rode Mint Meadows Farm and Don Metzgr's B Determined, trained by Suzanne Stettinius, to win the second division of the flat race by 2 lengths over Boss is a Pal, also trained by Stettinius, in a four horse race.

"My best feeling was that it didn't feel like a first time meet," said Boyer. "The day went well. There were no horses or riders hurt. We're fully committed to run again next year. We're thinking of moving it to a week later. Any time in the spring you move a week later, you're going to get better weather."

"Now we have two miles of snow fence to take down," said Boyer.