Md-bred Distant Shore wins, thrilling 75 of the owners who were at the track

CHESTERTOWN, Md--Cynthia and Charles McGinnes bred Distant Shore at their Thornmar Farm in Chestertown, and now he has thrilled 200 brand new horse owners and has made at least that many, plus all their friends, fans of racing. 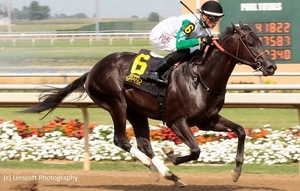 Distant Shore winning first timeout (Photo by Linscott Photography)"Distant Shore is a colt that we bred and sold as a yearling," said Cynthia McGinnes. "He is third generation breeding for us, out of Glimpse, who is by Touch Gold out of Almost Paradise, who is by Allens Prospect out of Muffies Muffin, our foundation mare. We bought Muffies Muffin because I had watched her run at Monmouth my first job out of college and loved her name."

"This is also the Family of Desiderata, a half sister to Glimpse, and dam of $300,000 stakes winner Everything Lovely," said McGinnes. "I love the fact that he is running for a racing club, bringing people into the game who could never afford it on their own. I hope he wins many races for them!"

THE STANDS were a little fuller, the excitement was a little higher and the cheers were a little louder on Tuesday, Aug. 14 during the sixth race at Indiana Grand.

The race included first time starter, Distant Shore, who is owned by the Churchill Downs Racing Club. and approximately 75 members of the Club, of which there are a total of 200 members, made the trip to Indiana to watch their horse race and break his maiden by a comfortable 4 lengths.

“This is our first time in the Racing Club, and our first time to Indiana Grand,” said Linda Willett of Louisville, Ky. “My gosh, this is just unbelievable, and I am thrilled to death. We were going to the races a lot this spring at Churchill, and we got a letter in the mail, so my husband and I decided to try it out. And Gary Palmisano has been so awesome with communicating the information about Distant Shore.”

Willett said her first encounter with Distant Shore was a “meet and greet” at the barn of trainer Tom Amoss.

There, she not only met the horse and the trainer, but she also met Palmisano, the Racing Club Manager, who was also in attendance for the debut of Distant Shore.

“We have 200 owners who put up $500 each to be in the Churchill Downs Racing Club,” Palmisano said. “This is Club Number 6. This is our first Club with Tom Amoss. We have people here from everywhere to watch, including Ohio, Indiana and Kentucky, and we even have people watching online from Connecticut. It’s open to people everywhere across the nation.”

The members of Churchill Downs Racing Club No. 6 will have Distant Shore through the duration of his career.

If he makes enough earnings, the Club will purchase another horse when Distant Shore is no longer racing for the ownership club.

One owner of Distant Shore is Gina Rodriguez of Kokomo, Ind., who is also a two-time owner in Indiana Grand’s racing club, Grand Gesture Stable.

She failed to miss a race of Grand Gesture Stable's Bold Concept, a 3-year-old filly who has placed second five times in five starts this year, but she was trackside to witness the win from Distant Shore.

“This is wonderful, and he ran such a nice race,” Rodriguez said. “There were a lot of nice horses in there, and he had so much more than I had imagined. And, he did it so easily. It’s very thrilling.”

Rodriguez will no doubt be trackside to see Bold Concept make her next start for Grand Gesture Stable at Indiana Grand.

She was also a member of the inaugural racing Club in Indiana last season that owned A J Pacer.

Both horses are trained by Anthony Granitz at Indiana Grand.

Rodriguez will also keep close tabs on her latest acquisition, Distant Shore, who was impressive in his racing debut.

Ridden by Alex Canchari, Distant Shore got out of the gate as one of the top contenders and sat patiently in a stalking position before overtaking race leader Sambucca and Gabriel Saez in the turn.

Distant Shore, who was acquired from the Fasig Tipton Maryland Two-Year-Old Sale this past spring for $50,000, strode off from the competition, winning by four lengths as the 5-2 favorite.

A Maryland-bred son of Algorithms, Distant Shore stopped the teletimer in 1:04.84.

Distant Shore was one of two wins on the program for Amoss, who currently leads the standings at Indiana Grand.

The Louisiana native is a five-time leading trainer and holds several training records at Indiana Grand, including most wins in one season (81) and most money earned in one season, more than $1.5 million.

THE APPROPRIATELY named Shamrock Rose was the decisive winner of the 12th Running of the $100,000 Malvern Rose Stakes for Pa-bred fillies, 3 years old and up, at 1 mile at Presque Isle Downs in Erie, Pa., on Aug. 5. 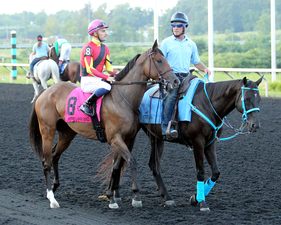 Stardoza led until Shamrock Rose took over at the quarter pole.

Bred by Best A Luck Farm LLC, the 3-year-old Shamrock Rose quickly drew off under heavy pressure until eased late in the stretch.