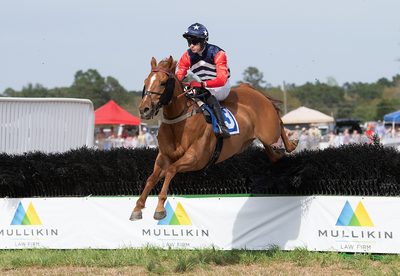 Historic Heart in the Carolina Cup (Photo by Tod Marks)Unfortunately, the live stream, which users now have to pay for, left a lot to be desired.

The first race was so dark that viewers couldn't see what the horses were doing, and it caused at least one trainer to call the NSA with a complaint.

In the second, also pretty dark, there was no voice-over, so viewers really couldn't tell what had happened.

"You should expect the live stream to be better, not worse, when you have to pay for it," said another trainer.

To the organizers credit, although the sound system was down for the entire rest of the races for the spectators in Camden, an enterprising official rigged a mike for the announcer to be heard on the live stream.

"HIGH MOUNTE only had one or two beat around the first turn," said Kingsley. "Gerard worked his way up, and at the last fence he went into the lead and drew away."

"I bought High Mounte off Jack Sisterson, the trainer at Calumet," said Kingsley. "He ran once for me, at Great Meadows, and was hurt and off for a year and a half.  It was good for him to come back and win like that. Time will tell if he keeps progressing."

"Mr. Alec raced on the turf for Christophe Clement," said Kingsley. "I called Clement after a disappointing race and got him. This was his second start over fences. He finished second at Pine Mountain last year."

Mr. Alec won an allowance race at Saratoga for Clement in 2020 but then was eighth in an allowance, optional claiming in 2021, after which Kingsley got him.

"He's had three jump starts with two seconds," said Kingsley. "He had a little injury at Middleburg last year. He's aimed for the Queen's Cup."

Young, who got Covid after attending Cheltenham, remained at home for the Carolina Cup, and her horses were saddled by Jimmy Wyatt, who had had 12 of her horses in training in Camden for four weeks previous to the race.

Cup of Aiken, owned by Ashwell Stable LLC, a group of owners that includes Hall of Fame trainer Jonathan Sheppard, and ridden by Harry Beswick, won the $20,000 Filly and Mare Maiden Hurdle by 10 lengths over MEP, trained by F. Hill Parker.

Sheppard bred Cup of Aiken, and he is known for giving his homebreds names relative to their breeding, but he said in this case his wife Cathy named the horse.

Cup of Aiken is by Magician (Ire) out of Brilliant Match, by Partner's Hero,

"We were in Aiken when the horse was born, and Jonathan had just won the Cup of Aiken in a polo game," said Cathy. "It was a magical win, and Jonathan scored the winning goal, making it a Brilliant Match."

"Cup of Aiken ran great," said Young. "She's a typical Jonathan homebred. "They all get better the older they get."

"I was delighted with Court Ruler," said Young. "He's a very nice horse if he doesn't bleed."

"Duckett's Grove pulled up before the last in the Maiden Hurdle with a tendon injury," said Young. "Presence of Mind ran a super race to be second to Historic Heart in the Stakes."

"It's great," said Young. "It was an exciting meet, and we haven't even run our best horses yet.

"He's a good horse," said Brion. "He's a barn favorite. I met the owners over Twitter. He matured over the winter. Parker gave him a great ride. He won so easily."

"Parish Delight is only 4, and this was only her third start," said Brion. "This is a tough track, so it was nice for her to run second. Magical Charm was third in the Filly and Mare Maiden, and that was her first start. Iranistan, who was third in the flat race, was prepping for the Temple Gwathmey."

"I brought young horses to Camden," said Brion. "I haven't run any of my big guns yet."

With Brion, last year's leading trainer, money won, and Fisher and Young, first and second in trainer, races won, still to bring out their best horses, it's an exciting spring and summer to look forward to.