UPPERVILLE, Va.--McLane Hendriks is having quite a spring, training winning race horses, including a stakes winner, and riding winners over timber. 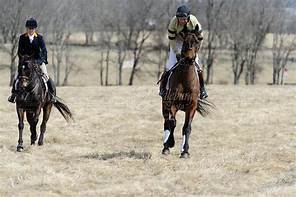 Piedmont Point-to-PointHendriks rode two winners on March 26 at Piedmont Fox Hounds Point-to-Point, one over fences and one on the flat.

His first winner was Bon Nouvel Chasers II's Ya Boy Ya (Ire), trained by Julie Gomena, in the 3 mile Maiden Timber.

Ya Boy Ya, who ran third in the six horse field for most of the race, began to make his move in the last mile and won in the stretch by 1 1/4 lengths over Cracker Factory (GB), trained by Mark Beecher.

"That was his first try over timber," said Hendriks.

"Cracker Factory fell at Warrenton, so I just wanted to get him a good, clean trip," said Beecher. "He jumped well."

HENDRIKS was second on Le Chevalier, trained by Gomena, in the Amateur and Novice Rider Timber, beaten 3 lengths by EHB Racing's Huyana, trained by Casey Pinkard.

"I just schooled him around," said Hendriks. "He was a nice second."

Hendriks took over training the race horses in his mother, Liz Merryman's string last fall when Merryman was diagnosed with breast cancer, and has since won two stakes with Witty as well as having other winners.

When he took over as trainer, he said he wasn't sure whether he would continue to also ride races.

He decided this spring to continue to ride as well as train.

"The jockey colony is pretty small, so when I put the word out that I was riding again, I got a lot of calls," said Hendriks.

With races combined due to lack of entries,the Lady Rider Timber and the Open Timber were combined.