AIKEN, S.C.--Leslie Young, sick with Covid, was home in bed on March 26, but nevertheless she had two winners and two seconds at the Aiken Spring Steeplechase, the first sanctioned meet of the spring season. 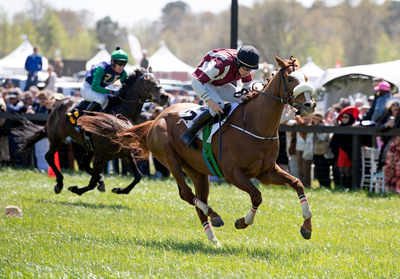 "All congratulations to Van," said Young. "He picked out the horse. He's a full brother to Ritzi A P. Van claimed him at The Meadowlands last fall and sent him to me. We ran him once last fall at Charleston when we were trying to win races. We ran him in a flat race this spring in the Florida Point-to-Point to support that meet."

"Then he went to Harry (Beswick) in Camden, where Harry was schooling him." said Young. "Harry seemed confident in him, but I thought the other horse would win. Maybe he'll run next at Tryon. When he was running on the flat, he was running in front and then just getting nipped at the wire. We're just trying to get him relaxed running behind."

BEE MAJOR looked rank in the beginning of the race but then settled mid pack while jumping well and came flying after the last fence to win.

"I bought him at Tattersalls," said Young. "He'd won at Royal Ascot. When we got him, he needed freshening. He'll go to Camden next."

"I went to Cheltenham," said Young. "I was fine coming home but then when I got home I got Covid. I feel better today."

Brion, last year's Leading Trainer, Money Won, had one winner, one second and one third while her fourth horse pulled up with a slipped saddle.

"It was a great day for good owners," said Brion. "I don't think anyone else expected him to win. He was running in England for these same owners before they sent him to me. He ran Jan. 29 at Cheltenham and was fifth behind a horse trained by Gordon Elliot."

Gaye Breeze (Ire), owned by Petticoats Loose Farm and trained and ridden by Sean McDermott, won the fifth and final race on the card, the $20,000 Ratings Handicap Hurdle.

Gaye Breeze won by 1/2 length over Don't Shout, trained by Young, and Fightinirishtabit, trained by Ricky Hendriks, was third.

Peat Moss (Ire), trained by Brion, hit an early hurdle hard and almost fell, with his rider, Hendriks, thrown crosswise across the saddle.

Somehow, Hendriks achieved what seem almost impossible and regained his seat, but in the process the saddle slipped and Hendriks had to pull up.