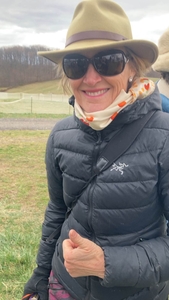 Kathy Neilson, Co-Chairman of Cheshire Hunt Races and the trainer of two winnersThe paddock also was relocated at the top of the hill at Plantation Field, which made it easy for spectators to see the entries before each race, and from the paddock it was just a short walk to the brow of the hill to be able to watch the entire race, with the finish up the hill directly in front of spectators.

With temperatures in the low forties along with a cold wind and even one or two snow flakes, the hardy group that braved the cold enjoyed a day of exciting racing with three sanctioned races combined with eight point-to-point races, including pony, timber, flat and side-saddle races.

"I thought the day was fantastic," said race co-chairman Kathy Neilson. "It was great to see three full fields of pony races, and the day went off without incident. We hardly even had a broken rail."

The meet was beautifully run with all the races going off on time due to the layout at Plantation Field which allowed vans to park near the paddock, and there were plenty of gaters to transport riders and officials.

Spectators always knew what was going on as announcer Jay Meister called the races professionally and accurately, a much appreciated upgrade from some of the announcing at recent meets.

DESPITE THE bitter weather, fellow jockeys welcomed Korrell into the ranks of sanctioned winners with the usual pail of water dumped over her head. 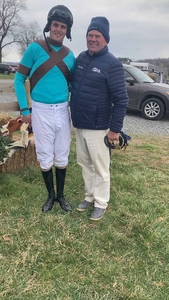 Ricky and McLane Hendriks"Yes, they got her," said her father Brian. "But she wasn't frozen. It wasn't too bad, they got her just a bit."

Owned by Boudinot Farms and trained by Leslie Young, who remained at home with Covid, Elusive Exclusive was rated second in a tightly group of the four entries in the $10,000 Apprentice Rider Timber throughout most of the race, went into the lead at the second to last fence and dueled with Road to Oz, trained by Mark Beecher, through the stretch to win by 1 length, with Renegade River, trained by William Dowling, third..

"He went well," said Korrell. "He was keen early, but he jumped well throughout. Running up the hill to the last, he had more stamina than the other horse.."

"It seemed a long time coming," said Korrell of winning her first sanctioned race. "I was in Ireland for two and a half months this winter, working for trainer Andrew Slattery. I rode in two bumpers and a schooling hurdle. I'm hoping to ride more races."

"Road to Oz ran a good race," said Beecher."He should improve from that. It was nice that Virginia won. It showed that if you work hard enough you get rewarded. It's good to have young riders winning."

"Master Seville is a very nice horse,"said Beecher. "He was bred by his owner, Anne Kingsley. He won a nice point-to-point last year, and then he slipped on the bend at Winterthur where four horses fell, and he got carried out in the Pennsylvania Hunt Cup. He's still a bit green but he's a nice horse for the future."

Master Seville raced mid-pack in the eight horse field until going into the lead over the second to last fence, and he went on to win by 1 length over Fletched, trained by Forrest Kelly, while Stooshie (Ire), trained by Cyril Murphy, was third.

Neilson saddled the winner of the first sanctioned race, the featured $10,000 Cheshire Bowl.

Nancy A. Read's homebred Awesome Adrian, ridden by Parker Hendriks, was last throughout in the four horse field before making a big move to go into the lead just before the last fence and going on to win by 2 1/4 lengths over Mercoeur, trained by Young, and Royal Ruse, trained by Sanna Neilson.

"I've had Awesome Adrian since he was a yearling," said Neilson, "Eddie Keating won on him here in a point-to-point race, and he was second last year in a sanctioned race here. Earlier, he ran over hurdles with some success. Sean McDermott told me he was  the best jumper he'd ever sat on."

""We hunt him," said Neilson. "Skylar made him into a lady's hunter. Parker rode a terrific race. He got him settled. I thought this would be a tough race to win."

The first point-to-point race, the Novice Timber, scratched down to two horses, and McLane Hendriks on Del Rio Chasers' Western Crusader, trained by his father Ricky, went right into the lead, extending it to about 20 lengths when Mighty Mark, trained by Neilson and ridden by her daughter Skylar McKenna, had a bad fence at the second, just escaping a fall and losing many lengths.

McKenna launched a bid after the last fence, but Henriks was so far in front that he cruised to a 2 length victory.

"Western Crusader was a hurdle horse until his owner, Gigi Lazenby, decided to make him into a timber horse and sent him to me," said Ricky Hendriks. "I sent him to Laura Chapot to make him over fences, and she had him for six weeks and did a great job with him. He's a great foxhunter."

"The plan was to stick behind Skylar, but my horse was a bit headstrong, so I went on with him," said McLane. "At the end, Skyler was coming but I had it measured."

Fenella O'Flynn saddled both flat race winners, although the second race was a dead heat.

"This was a nice training race for both of them before they go back to the track," said O'Flynn. "They'll run either at Laurel or in New York. They're both turf horses, and they go long. They'll run as soon as the turf season opens. Felix rides Rheaume every day."

"Ace Ventura is going to run over hurdles," said Neilson. "He may start first at Tryon."

Olivia Starr rode her own Nova, trained by Julie Nafe, to win the 1 mile flat Side Saddle race by 1 length over Lauren Apple on Sky Babe, owned and trained by Nafe, with Gun Lobby, owned, trained and ridden by Nafe, third.

Ortiz returned to win the 1/2 mile Medium Pony race on Blueberry over Kern on Roger That and Slate ron Domino Effect in a seven pony field.

Thomas Houghton continued his winning ways on Charmed in the Large Pony 3/4 mile Flat race, beating Kern on Goose and James Wyatt on Baily in yet another well filled field of eight.

The Lead Line Trot race drew a field of 10 and was won by Daniel Edelstein on Domino Effect over Pauly Aguilera on Thumper and Gus Chalfin on Blueberry Pie.