Kate and Bernie Dalton team up to win two at Monmouth

Kate Dalton saddled two horses for her husband Bernie to ride to victory, both in $30,000 Sport of Kings Maiden Hurdle races at Monmouth racetrack on Thursday, Aug. 9. 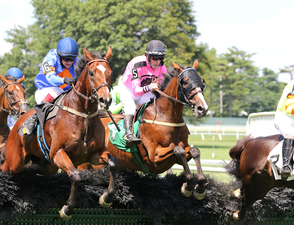 Belisarius, number 5 on the right, over an early hurdle  with Special Eyes , number 6, on the left. (Photo by Equi-Photo)"That doesn't happen very often," said Kate.

"Dancin in the Rain joined our stable in early spring," said Kate, who trains out of Camden, S.C. "He's just a baby. He's only 4. He's been steadily improving. His form is a little deceiving. He's been getting better with every race,"

"BELISARIUS is a very classy horse," said Kate. "He hasn't run a bad race since we converted him to a jumper last January. He's a consummate pro. He came from California, but he's  world traveler."

Belisarius has run in California at Santa Anita and Del Mar, at Saratoga, Belmont, Aqueduct, Keeneland and Gulfstream Park since being imported from Ireland in 2014, where he was stakes placed.

As a steeplechase horse, Belisarius ran third twice and then second in Maiden races before winning a flat allowance race at Suffolk for horses that had started over fences.

"We'll see how they came out of those races at Monmouth," said Kate. "Belisarius may run at Belmont in September, and, if Dancin in the Rain came out well, he may run in the final race at Saratoga."

Steeplechasing returns to Saratoga on Wednesday, Aug. 22, with the New York Turf Writers on Thursday, Aug. 23.