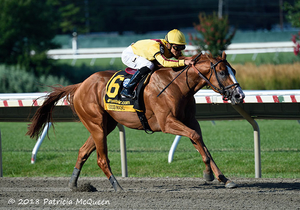 Good Magic winning the Haskell (Photo by Patricia McQueen)Good Magic won the G1 Haskell Invitational on Sunday, July 29 at Monmouth Race Track by 3 lengths over Bravazo, and Tenfold won the Jim Dandy at Saratoga on July 29.

Trainer Chad Brown said Good Magic came out of his three-length win in good order and remains on target for a return trip to Saratoga Race Course to compete in the Travers on Aug. 25.

Good Magic, the runner-up to eventual Triple Crown winner Justify in the Kentucky Derby on May 5 at Churchill, was coming off a two-month break since running fourth in the Preakness and looked impressive in his return at the 1 1/8-mile Haskell.

The Curlin colt outkicked runner-up Bravazo for his first graded stakes win since capturing the G2 Blue Grass on April 7 at Keeneland and his third stakes win overall when added to his Breeders' Cup Juvenile victory in November at Del Mar.

"I thought he ran well yesterday, and we were really pleased with his performance," Brown said. "The horse is now in Saratoga, and hopefully he'll point to the Travers."

Should Good Magic run in the Mid-Summer Derby, it'll mark his first appearance at the Spa since running second in his debut on Aug. 26 last year.

The Preakness was the only time the Kentucky-bred, owned by e Five Racing Thoroughbreds and Stonestreet Stables, finished off the board in eight starts.

TENFOLD WON the $600.000 im Dandy Stakes at Saratoga on July 28 by 3/4 lengths over a small field of only five horses, with Flameaway second and favorite Vino Rosso third, a head back. 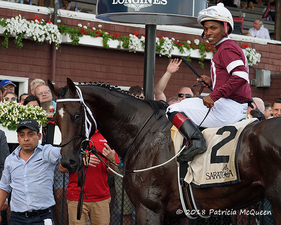 Tenfold winner of the Jim Dandy (Photo by Patricia McQueen)"This is the type of horse we thought we'd have for the Belmont," said Steve Asmussen, trainer of both Tenfold and fourth-place finisher Reride. "He was away cleanly today. He's got a big rhythm. He's a horse who is capable of being fast. That's how he's most effective.

"I felt a lot better through the stakes; I felt like the fastest horses were winning regardless where they were, and that gave me a lot more confidence."

"I wasn't happy until they put his number up," said Asmussen. "I watched it from down the stretch a bit because he has lost concentration. Ironically, he has jumped back to his left lead and laid in in his previous races. It's obviously concerning. I'm glad he still won the race. But we all know he can do better and we have work to do."

On the Grade 1, $1.25 million Travers on August 25 for Tenfold,  Asmussen said, "That's what we were trying to get to with this race here today. I'm glad we ran him over this racetrack, because he does find something new all the time. Ricardo said when he moved away from that horse, he got a view of the screen in the infield, and he couldn't get him to quit looking at it."

"Today, I changed my plans," said Ricardo Santana, Jr.,who rode Tenfold. "He has a lot of speed, and today I saw there isn't a lot of speed in the race. The only speed is the number 1 horse [Flameaway] and I told Steve that today, I want to change my plan and put Tenfold over there in the race, and it worked today. I put him over there close to the speed and turned for home, and he opened up. I had plenty in the tank. He was watching the TV [infield monitor] and he got a little scared, but he passed the wire first. We got lucky and passed the wire first. Today he showed his class."

Mark Casse, trainer of Flameaway, said, "He ran hard. We'll see about the Travers. I'll talk to [his owner John Oxley. As of an hour ago, I think Wonder Gadot is going to run in the Travers. We'll see. I'm fairly certain, if everything stays the same, we're going to try the Travers with her. She likes a mile and a quarter as good as anybody. We figure it's one of our only shots, so why not go for it? As far as Flameaway, I'll have to talk to Mr. Oxley."

"My horse put in a huge effort," said Jose Ortiz, who rode Flameaway. "He broke really sharp out of the 1 hole and didn't have any other options, I had to go. Ricardo put himself there. He rode like he had the best horse. I think I was just second best today. My horse ran huge.

"I knew I wasn't going to walk on the lead. There were two horses with speed, and they both had a very good shot. I can't complain. Tenfold is a very nice horse, and Ricardo rode him very well. Steve Asmussen is doing a great job, as always, and here, his horse ran very well. But, we're very happy with the performance of our horse. He ran huge and we're looking forward to seeing him again."

Mike Repole, owner of beaten favorite and third-place finisher Vino Rosso, said, "We've seen this performance before. He has done it at Tampa a couple of times. Maybe a little moisture in the track and he runs in spots, but when he puts an effort into it he makes up ground. He made up probably 10 lengths in less than a quarter mile, and he put his head down and galloped out in front. The biggest key now, if we decide to go the Travers, is to get him to run 100 percent of the race and not 50 percent of the race.

"We made up ground down the lane, not much more to say than that." said John Velazquez, who rode Vino Rosso. "That's just his style, to come from far back."