Jenkins and Motion win Stakes, Matz and Houghton have winners 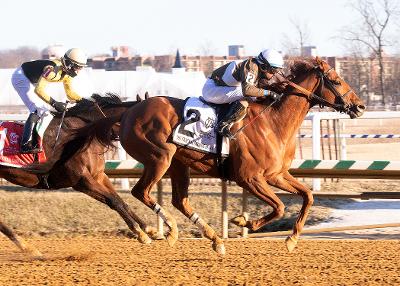 Cordmaker has now won 14 races, including nine stakes, with four seconds and seven thirds and earnings of $989,640.

The General George was his first graded stakes win.

Ouraika ran three times in France last year, winning a maiden race at Dax, before being imported to this country.

She ran twice last year, finishing  fourth in the Chelsey Flower Stakes and second in an allowance.

Ouraika now had two firsts and two seconds from six starts and earnings of $100,019.

MOTION had two other winners in February.

Rated outside down the backstretch, Belgrade raced four wide on the turn and prevailed in the stretch to win by a head.

MICHAEL MATZ saddled Runnymoore Racing's In a Spin to win a $32,000, 1 mile Maiden Claiming race at Gulfstream on Feb.4.

Running second early, In a Spin angled five wide on the turn and edged away in deep stretch to win by 1 length.

All Tacked Up stalked the early pace, vied for the lead three wide on the turn and drove to the finish to win by a head.