FAIR HILL, Md.--Keri Brion accepted the Eclipse Award in steeplechasing for The Mean Queen following an exceptional season for the now 6-year-old mare, flanked by the mare's owners, the Moorheads, and Brion's team of assistant trainer and exercise riders.. 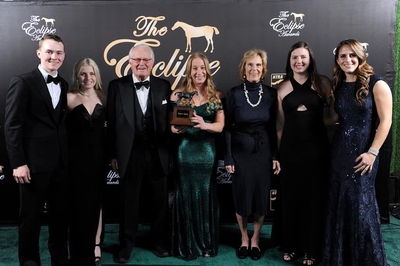 The Mean Queen, who was still a novice in her first season over fences, won both those G1 races, but the rivalry is not yet done.

The Mean Queen and Snap Decision will meet again at the Iroquois Steeplechase in Nashville, Tenn., on May 14.

The Eclipse Awards were held at Santa Anita Park in Arcadia, Calif., on Feb, 10.

"Ron bought the table, so it was the seven of us at the table," said Brion. "We were the only ones from steeplechasing there, because everyone thought  The Mean Queen's winning was a sure thing."

The other two candidates for the Award were Snap Decision and Baltimore Bucko, also owned by the Moorheads and trained by Brion, and in the past it was usual for representatives of all thee candidates to attend the awards ceremony.

"WE FLEW in Wednesday and flew back Friday," said Brion. "I've been to three awards ceremonies before this one, and this was the best run."

Brion had been to the previous awards ceremonies at Jonathan Sheppard's assistant trainer was on the stage with him to accept the award for Winston C in 2020.

The start of this year's ceremony was delayed for half an hour due to heat, but Brion said the temperature was only 80 degrees and that it was very comfortable.

"We were the ninth award," said Brion, who thanked the Moorheads and The Mean Queen for her exceptional first year as a trainer during her acceptance speech. "There were a lot of high profile people there, so it was nice to be a part of it."

Back training at her base at Fair Hill after the award, Brion said that The Mean Queen would probably just run in one flat race before she starts over fences at Iroquois.

She said the mare probably wouldn't go back to Saratoga, where she won the G1 Jonathan Sheppard last year.

"Both the grade ones at Saratoga are handicaps, so she'd probably get too much weight," said Brion. "That's why Snap Decision didn't run at Saratoga last year.

"Our main goal is Cheltenham next year, so she won't have a massive campaign this year. We'll probably only run her in the Iroquois and the Grand National."

Last year, The Mean Queen also won both the Lonesome Glory at Belmont and the Grand National at Far Hills, the two races in which she defeated Snap Decision.

"We'll do the same this spring with Snap Decision as we did last year," said Fisher. He'll run at Middleburg and then at Iroquois.."

Fisher said the only other grade one horse he has right now is Moscato, an 11-year-old gelding owned by Bruton Street-US, a multiple stakes winner who won the G1 A.P. Smithwick at Saratoga in 2020.

"Moscato will go in the Iroquois," said Fisher. "The Mean Queen is good, and she gets the seven pound mare allowance. That's why I'm send Moscato (to Nashville along with Snap Decision)."

The Iroquois will foretell a lot about the upcoming season, as not only will The Mean Queen and Snap Decision meet again, but they'll be challenged by Moscato and another Brion entry, Iranistan, a stakes winner owned by Hudson River Farms.

Other trainers who have top jumpers like Ricky Hendriks and Leslie Young may decide to test their horses in the Iroquois, too, although Hendriks said that as of now he's not planning to run anything in the G1 Iroquois.

"Winston C won't run until the summer," said Brion. "He'll go to Saratoga. He's a Saratoga specialist. Iranistan will start first in the Temple Gwathmey. French Light is still a novice. He runs best fresh. I'll talk to the Naylors, but he'll probably go to the Queens Cup and then Saratoga. And I still have a bunch of maidens coming thorough. I'll try to keep them apart and run them in separate maiden races.""