COUNTY KILKENNY, Ireland--Bruton Street's Franco de Port placed second in the Grade A Goffs Thyestes Handicap Chase at Gowran Park in Ireland on Jan. 27, just beaten by Longhouse Poet in an exciting duel to the finish line in the 3 1/8 mile race. 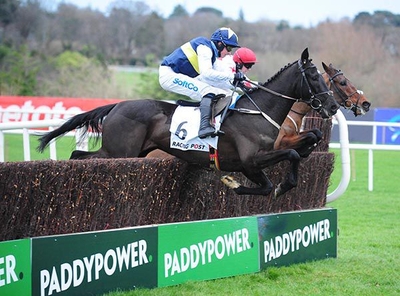 Franco de Port, shown here in a previous race in IrelandTrained by Willy Mullins and ridden by Paul Townend, Franco de Port started off far back in the 16 horse field in a race that the announcer called "the race of the year at Gowran Park, slowly making his way closer to the front until he jumped the last fence close to the lead.

The 7-year-old gelding fought to beat the horse he was giving eight pounds to, but in the end the weight after 3 1/8miles took its toll and he was second.

"It couldn't have been more exciting," said Charlie Fenwick, who is a part owner of Franko de Port as a partner in Bruton Street along with Mike Hankin and Charlie Noell.

"He ran well last time out, but he had a bad fence at the second to last and lost all his chance," said Fenwick. "He jumped very consistently and very well today. He went wide on the turn, I think looking for better ground. He was giving eight pounds to the winner, so we had to be pleased."

"We had wondered if he could get three miles, and today he showed he could,"said Fenwick. "Paul Townend is a very good rider, so we were pleased to have him up on him. We've got a nice horse, but we've a ways to go to see just how nice."

Mullins and Gordon Elliot are the two leading steeplechase trainers in Ireland.

Misty Mauve won by 4 lengths in the second race in her career after finishing second first time out.

Divine Huntress won by 12 3/4 lengths after finishing third in her first start at Laurel and then winning a Maiden Special Weight at Parx on Dec. 13.

Motion also had two Maiden Claiming race winners in Florida, one at Gulfstream and one at Tampa Bay Downs.

Treasure Tradition won by 6 lengths and now has one win, two seconds and one third from seven starts.